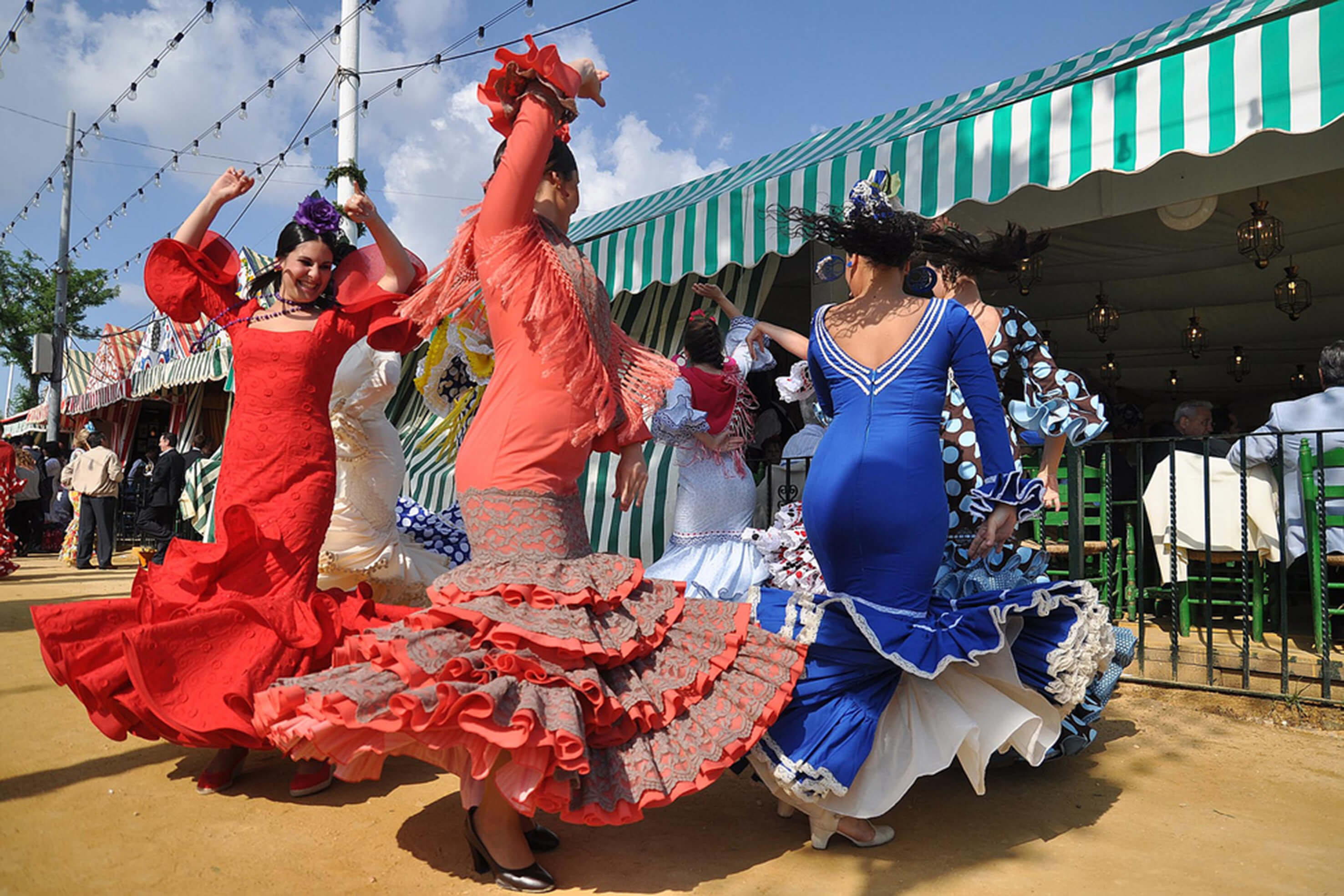 With influences from the Romans, Arabs, and Visigoths, Spain is a mosaic of diverse languages, traditions, cultures, and ways of life. That’s what makes it such a bucket list worthy destination! You can go from admiring Moorish palaces in Granada to touring Roman aqueducts in Segovia. In this post, I’m sharing important things you need to know before visiting Spain so you don’t embarrass yourself or get ripped off. Here is everything you need to know before visiting Spain.

Essential travel tips to know before you visit Spain

While Castellano (Castilian Spain) is the main official language that everyone speaks, Spain also has 3 co-official, regional languages. Here’s a breakdown of the languages of Spain.

Normally, Spanish people will ask you ‘Hablas Castellano?’ (Do you speak Castilian Spanish?) instead of ‘Hablas Español?’ While the words are interchangeable, Castellano refers specifically to the Spanish spoken on the Iberian Peninsula while Español refers to the Spanish language in general.

There are various dialects of Castellano across Spain, such as Andaluz (Andalusian dialect), which is notoriously hard to understand. The Castellano spoken in the city of Valladolid is apparently the easiest to understand. Although you can get around in most cities in Spain without speaking Spanish, it is helpful to at least know some basic survival Spanish.

Gallego is a romance language spoken in the community of Galicia, northwest Spain. The language is closer to Portuguese than it is to Spanish. In fact, it is almost identical to Portuguese. Galicia is located just to the north of Portugal so you will find a lot of overlap between Gallego and Portuguese words, like boa noite (good night). A taxi driver I met in the Galician city of Vigo told me that a considerable number of people there also speak Portuguese.

Euskera, or Basque, is the native language of the Basque Country, northeast Spain. It is one of the oldest languages in the world. Oddly, no one knows where the language originated from, not even the Basque people. Euskera is often compared to Hungarian because of the similarities in phonetics and sentence structure.

I studied abroad in the Basque Country and learned a little bit of Euskera – basic words and phrases like:

You can identify Euskera by the combinations of letters in the words – lots of Xs next to Ts, double Rs, Zs next to Ks, and three consonants back to back like in the word ‘ulertzen’ (to understand.)

Sadly, Basque is a dying language. The younger generation doesn’t learn it as much anymore, instead choosing to learn English, French, or other ‘more practical’ languages.

This romance language is native to the community of Catalunya, which has made headlines for fighting to gain independence from Spain. I like to describe Catalan as Spanish with a French accent. At least, that’s how it sounds to me.

The community of Valencia and the Balearic Islands also speak dialects of Catalan. Some consider Valenciana to be its own language, but the Spanish government doesn’t recognize it as such. Catalan and Valenciana speakers can understand each other.

2. Spain has two islands and two territories in Africa

There is more to Spain than the mainland on the Iberian Peninsula. Spain is also made up of the Canary Islands, the Balearic Islands, and Ceuta and Melilla, its territories in North Africa.

The Canary Islands,  located off the coast of West Africa, are home to popular destinations like Tenerife, Gran Canaria, and Lanzarote. On the Balearic Islands, off the east coast of Spain, you’ll find Ibiza and Palma de Mallorca. There are also some smaller islands off the coast of Vigo, Galicia – the Cies Islands. 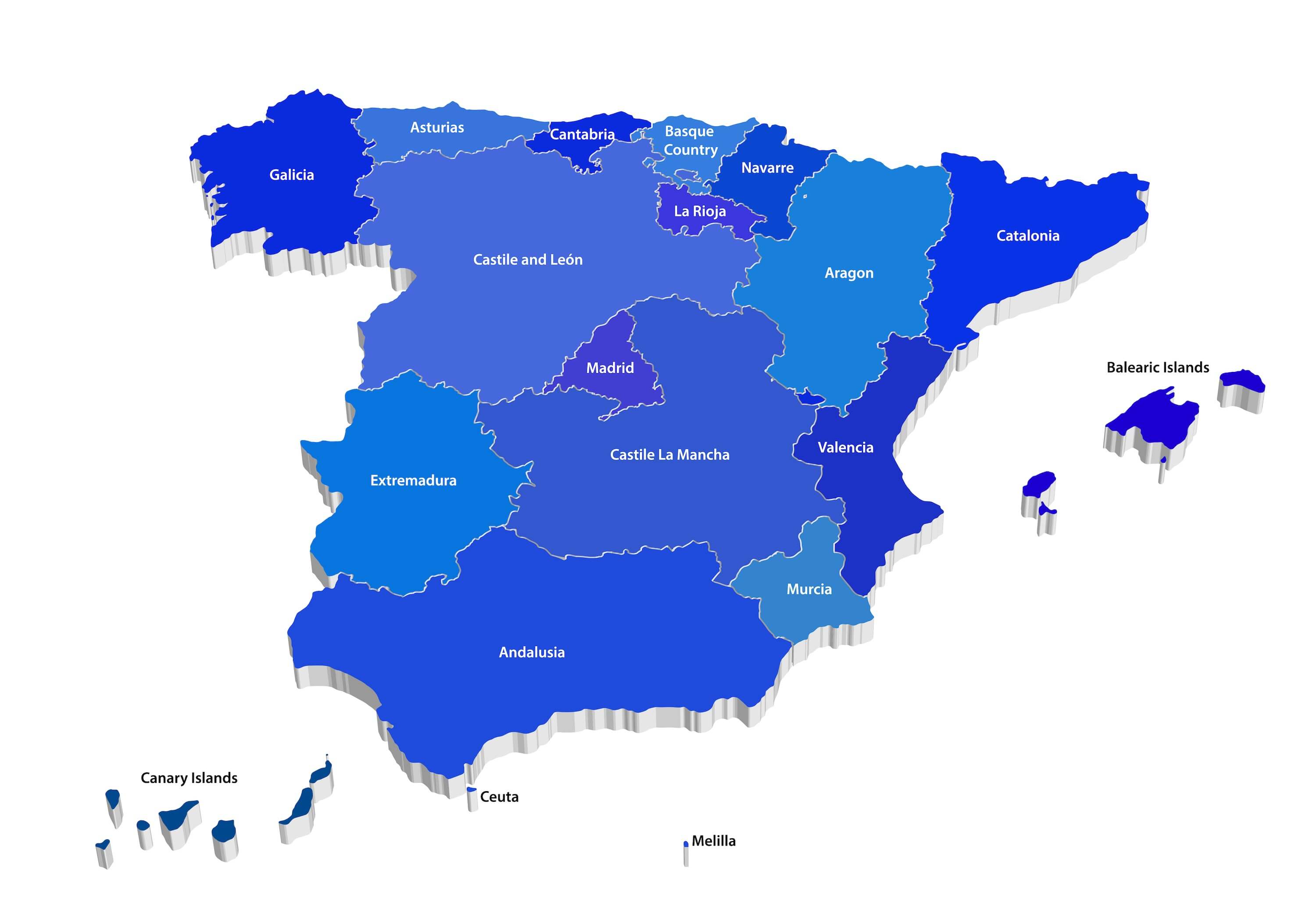 Spain is known for its laid-back culture, which has its pros and cons. Spaniards tend to take a laissez-faire approach to work. On the plus side, stress is low and happiness is high. On the negative side, you end up with employers that don’t pay workers for 3 months and a government that is a headache to deal with. Try applying for a long-term visa to Spain, and you’ll see what I mean.  Because they value leisure and relaxation so much, Spaniards observe this thing called Siesta, meaning rest. Between the hours of typically 12 noon – 3 pm, stores close so people can go catch some Zzzzs or have a chat with friends. Plan your shopping accordingly. Also, note that supermarkets normally don’t open on Sundays.

You’ll often find conflicting information about siesta. Some say it’s a thing of the past while others claim it’s alive and well. The reality is that siesta still exists, but it’s mainly observed in smaller cities and towns. In big cities like Madrid and Barcelona, it’s largely seen as outdated. Siesta is not mandated by law so most businesses choose to buck the trend in favor of higher productivity. That said, some institutions, such as schools, do observe siesta. Mom and pop shops, grocery stores, restaurants, and banks may also observe siesta.

8 Most Underrated Cities To Visit in Spain

4. Be extra careful where you buy paella

Rule of thumb: if you go to a restaurant and they’re serving paella out of large pans on display, run as far away as possible! It is almost guaranteed to be sub-par. Also, avoid any restaurant that advertises its paella with stock photos. Stock photos equal watered down paella geared towards tourists. You want an authentic restaurant that cooks your paella when you order it.

Where to get the best paella? At a mom and pops restaurant – small, family-owned restaurants usually serve better paella than restaurants you’ll find in plazas and in the city center. Always ask a local for recommendations.

Case in point: I was so excited to go to Valencia, the birthplace of paella, and stuff myself. But I made the amateur mistake of going to a busy restaurant in the city center. I thought well it’s busy so it must be good. Wrong! The paella was inedible! The rice tasted like it had been out for 3 days because it probably had.

Then I went to visit a friend further south in Alicante. She took me to a hole in the wall down the street from her house. It was the second-best paella I’ve ever eaten, after one I had at a hole in the wall in Palma de Mallorca. See the pattern here?

Some may think of Spain as the Hawaii of Europe, but it’s not quite like that. Spain experiences four seasons with varying weather conditions.

In Madrid, temperatures drop to can drop to the 30s and 40s (degrees Fahrenheit.) It also snows and hails sporadically between December and February. Then in the summer, it can get unbearably hot. Madrileños (people from Madrid) tend to go to the coast during the summer to escape the heat.

Galicia, located on the northwest, is the rainy part of Spain. It can rain up to 300 days out of the year! if you want to experience the best weather, go in May or June.

In the Basque Country, it can snow nonstop for days in the winter and can remain relatively cool well into the spring. It also rains quite a lot in the winter. Even coastal cities like Barcelona and Valencia get chilly in the fall. 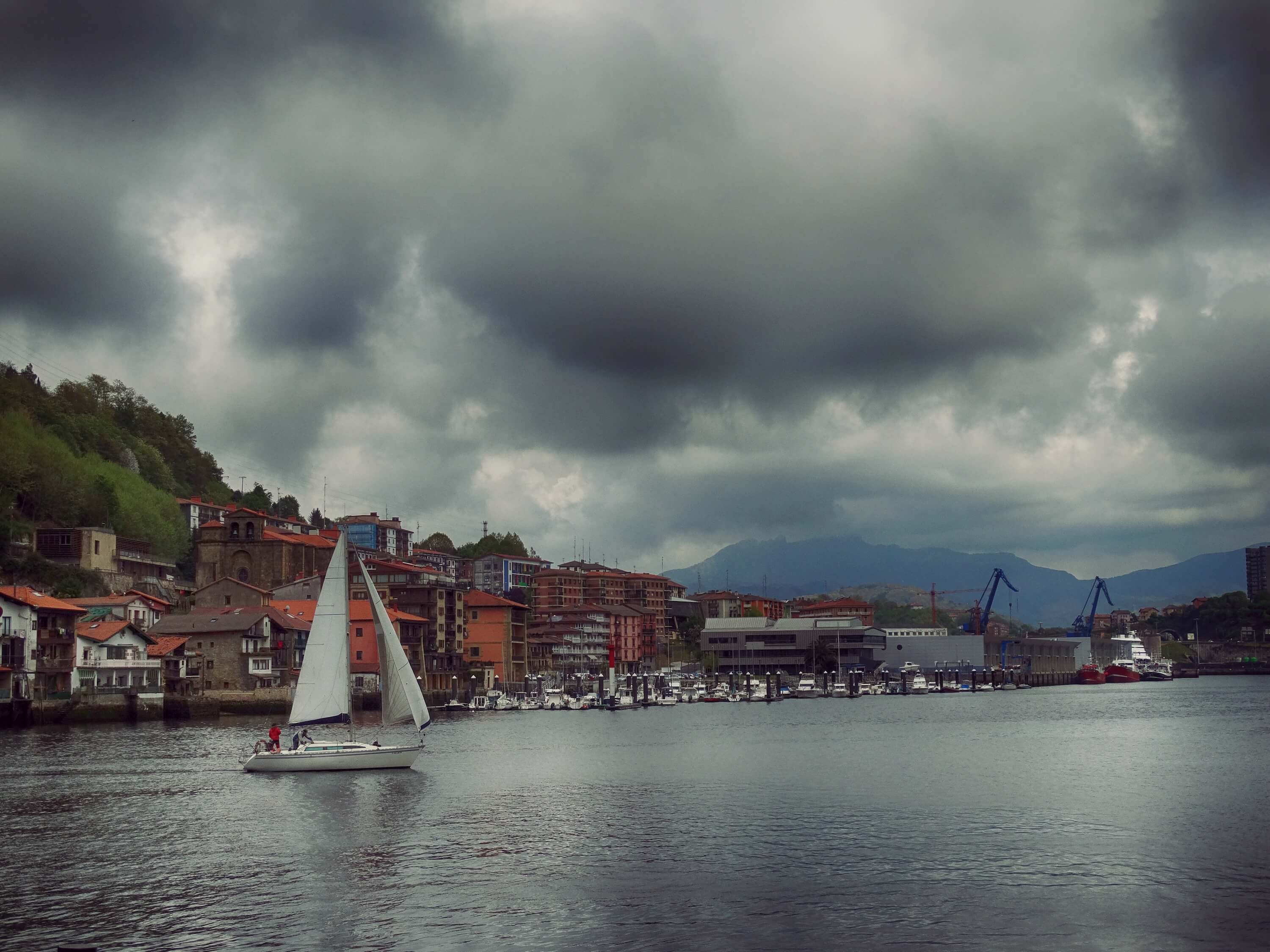 This is one cultural difference that might take some getting used to. In Spain, dinner is a late night affair. Some restaurants will close after lunch and then open back up at 9 pm when Spaniards go out to dinner. I stayed at an Airbnb with a family in Madrid, and they invited me to have dinner with them at 11 pm! Of course, you still have dinner whenever you want if you cook your own food. But if you plan to dine out, you may have to wait, unless you go to McDonald’s.

7. Ride-sharing is much much much cheaper than taking the train

Renfe is the national train system that connects most cities and towns. But tickets can get expensive, especially if you purchase them on the day of your trip. To get from Madrid to Barcelona can run as high as 100 euros each way. You can buy a flight with that!

Another alternative to flights and trains is a ride-sharing service called Bla Bla Car. If you ignore the ridiculous name, you can expect to save as much as 90% off the price of taking the train. The website allows you to find drivers who are traveling to a specific destination and have room to spare in their car. You arrange a meeting spot and carpool to the location. This is also a great way to meet locals and practice your Spanish. Bla Bla Car is my preferred method of travel in Spain, followed by the also-affordable Alsa Bus.

8. The festivals are not for the faint of heart

Spanish people know how to throw a big party, and will often include an element of danger. At some point in your lifetime, you need to go to a Spanish festival. Just do it. You’ll thank me later! There are tons of festivals in Spain, but be careful which ones you choose to attend. With angry bulls and structures ablaze, some of these festivals require extra caution. Here are 5 festivals you should consider: 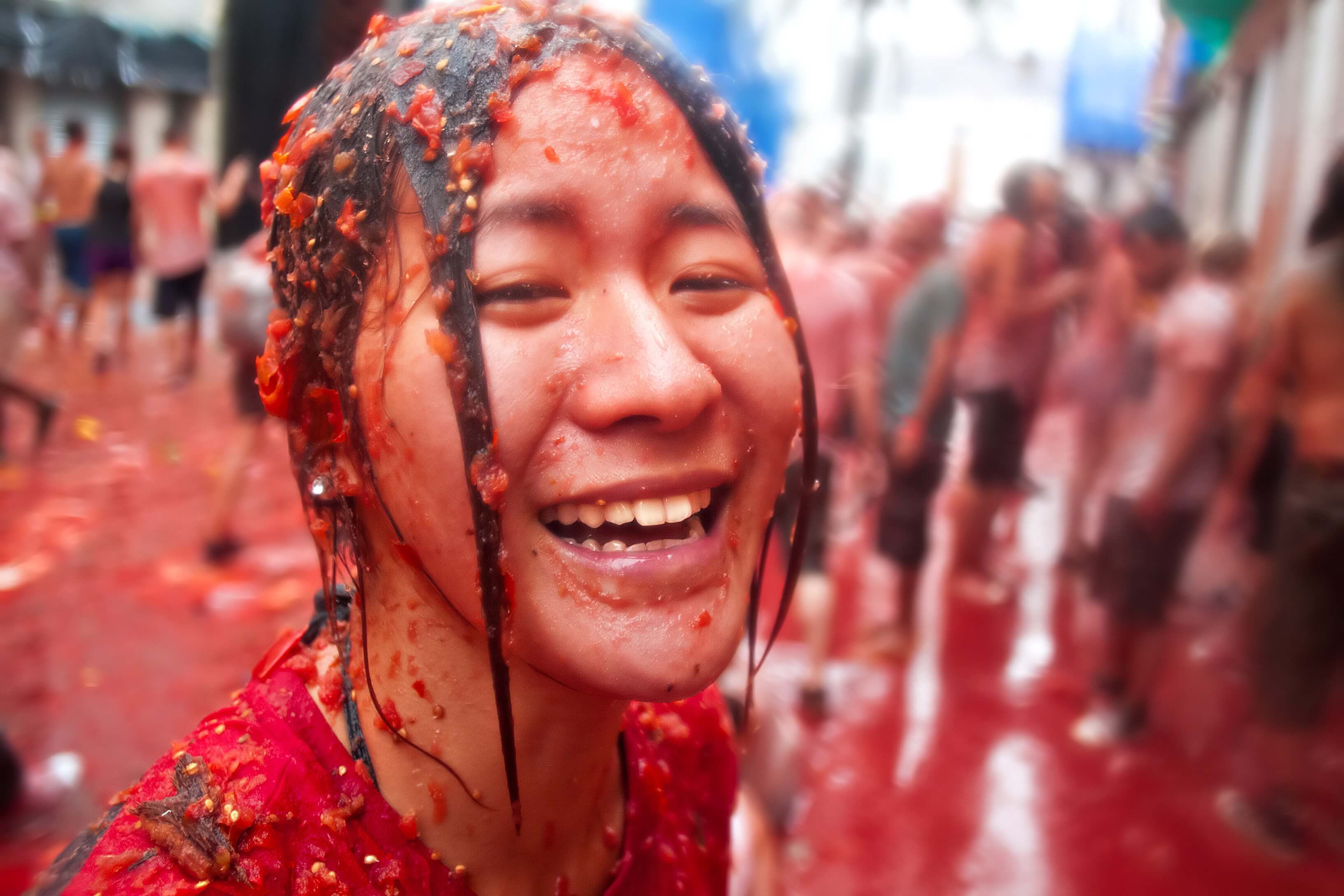 9. You won’t find much spicy food

Spanish people like to use simple ingredients in their food – salt, olive oil, herbs, saffron, paprika, to name a few. One ingredient you will almost never find is pepper. It’s not like Mexican food at all! Spaniards don’t eat spicy food so don’t go looking for hot wings or hot Cheetos at the supermarket!

Even if you’re going for ‘ethnic’ food, like Indian or Chinese, you will find that the dishes labeled picante (spicy) are often mild or not spicy at all.

10 Things You Must Know Before Visiting Spain

10. Flamenco is not the national dance

Due to the popularity of Flamenco, people often mistakenly believe it is the national dance of Spain. It’s not! Flamenco is a regional dance from Andalusia created by the gitanos (gypsies).  It is heavily influenced by Near Eastern styles of dance that the Moors who ruled Spain for 800 years brought with them.

You’ll normally find the most authentic Flamenco shows in the cities and towns of Andalusia – Granada, Sevilla, Jaen, to name a few. Flamenco dancers in Andalusia often perform in small, cave-like venues that provide an intimate setting, in keeping with tradition. You can still see a good Flamenco elsewhere in Spain, but I highly recommend you experience Flamenco in Andalusia. It’s just on another level. They live and breathe Flamenco down there! 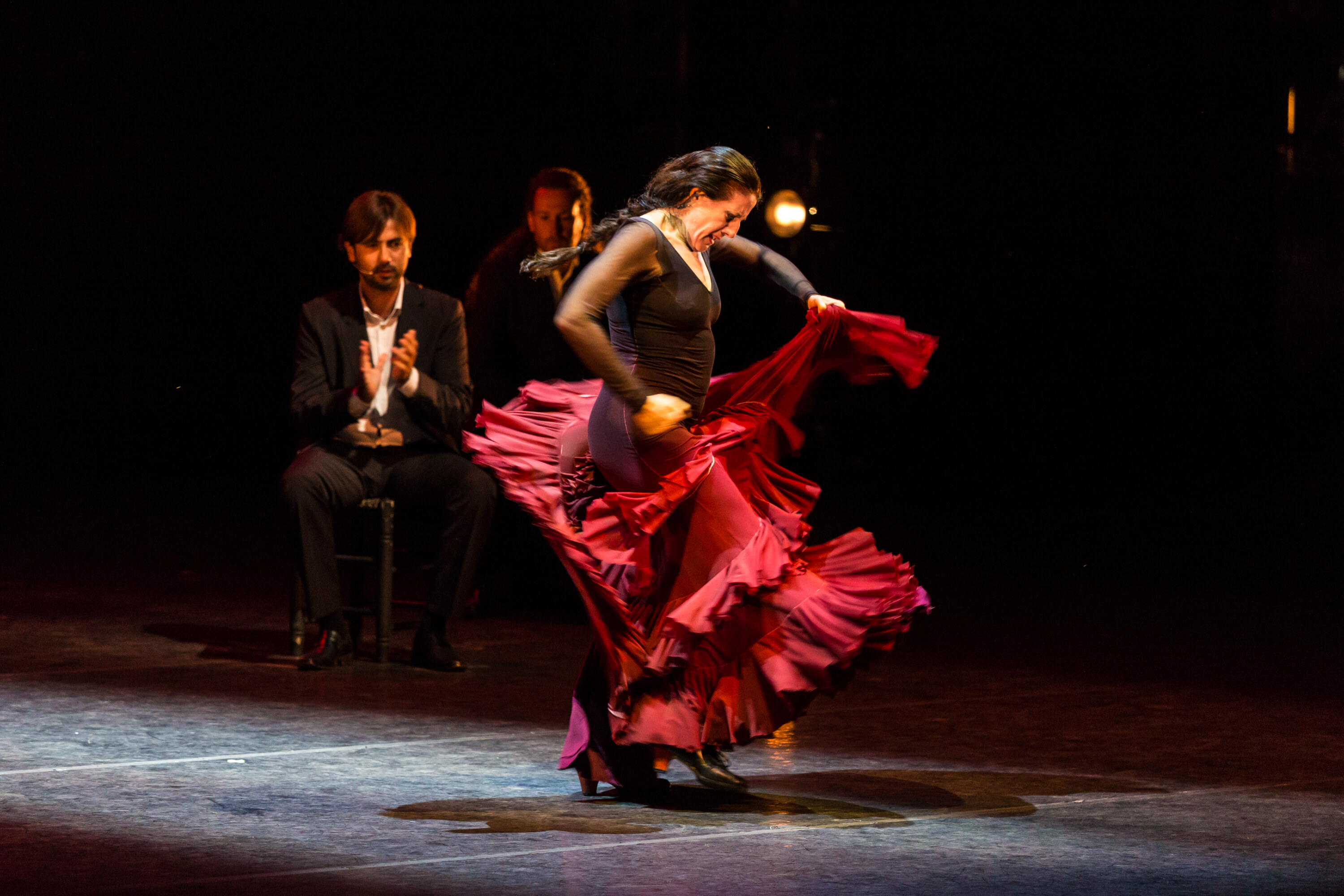 There you go – the 10 things you need to know before visiting Spain.

The Ultimate Guide To Spain: Best Things To See, Do, and Eat 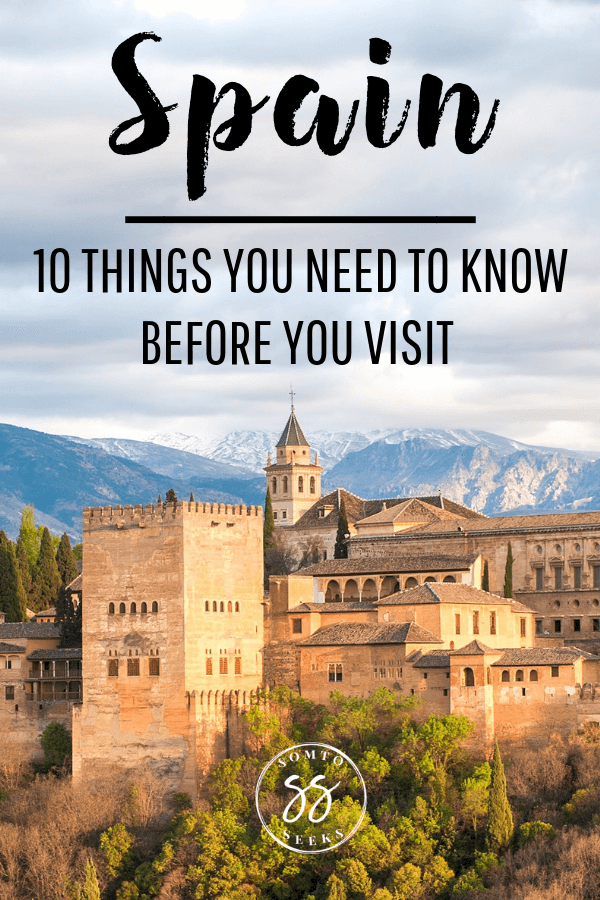 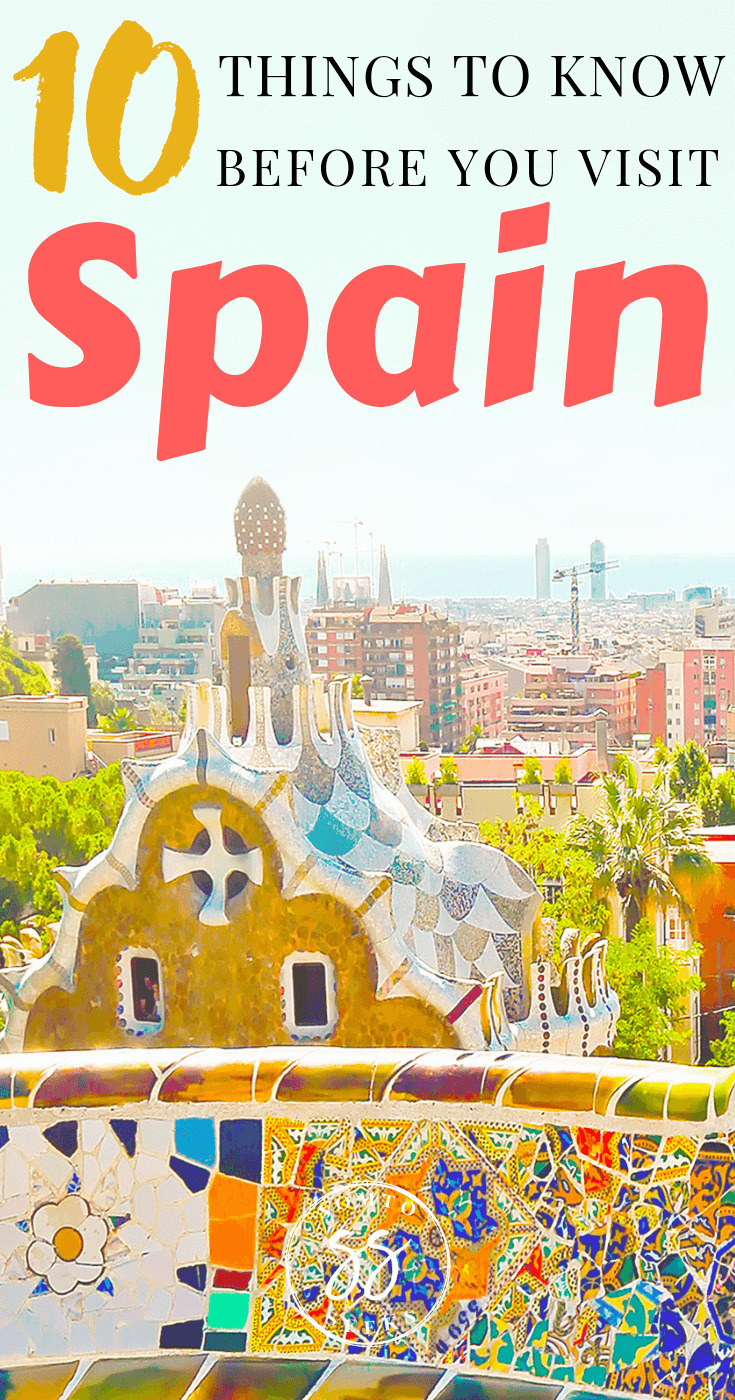 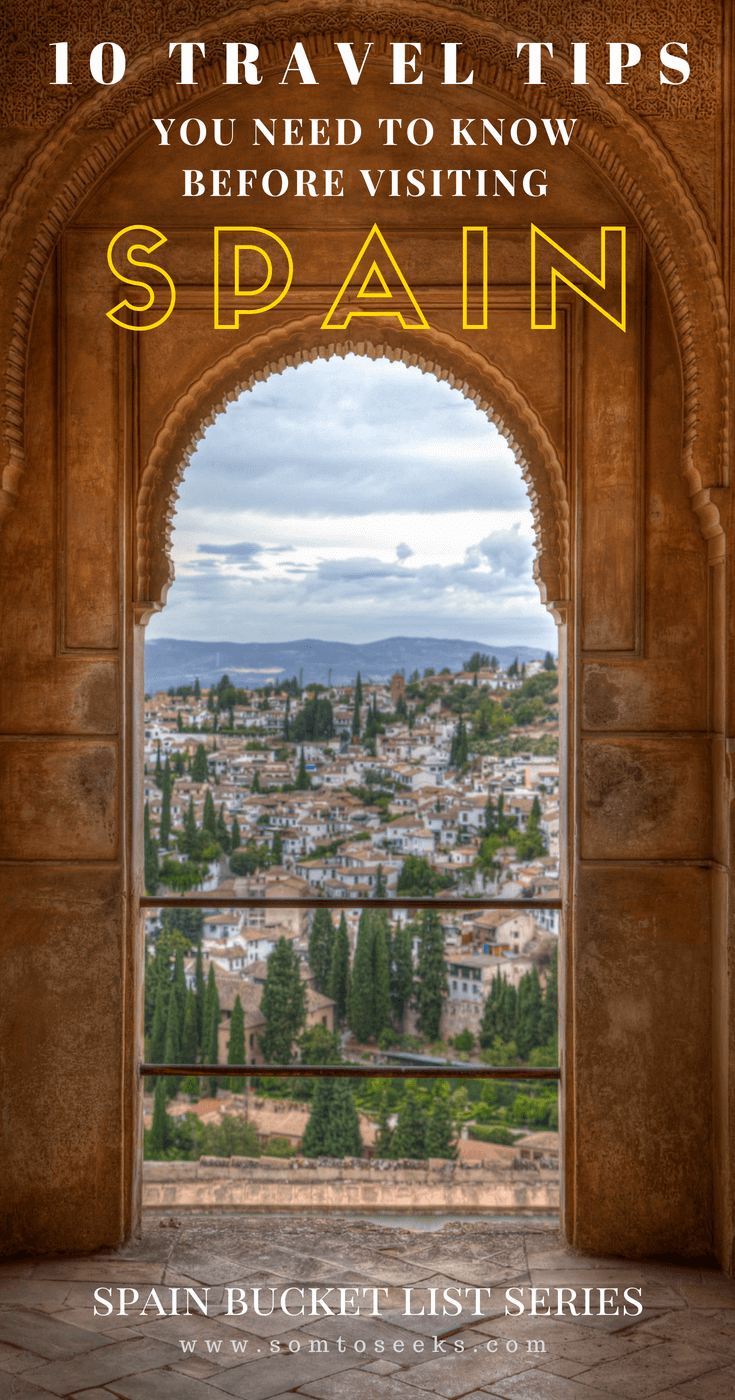 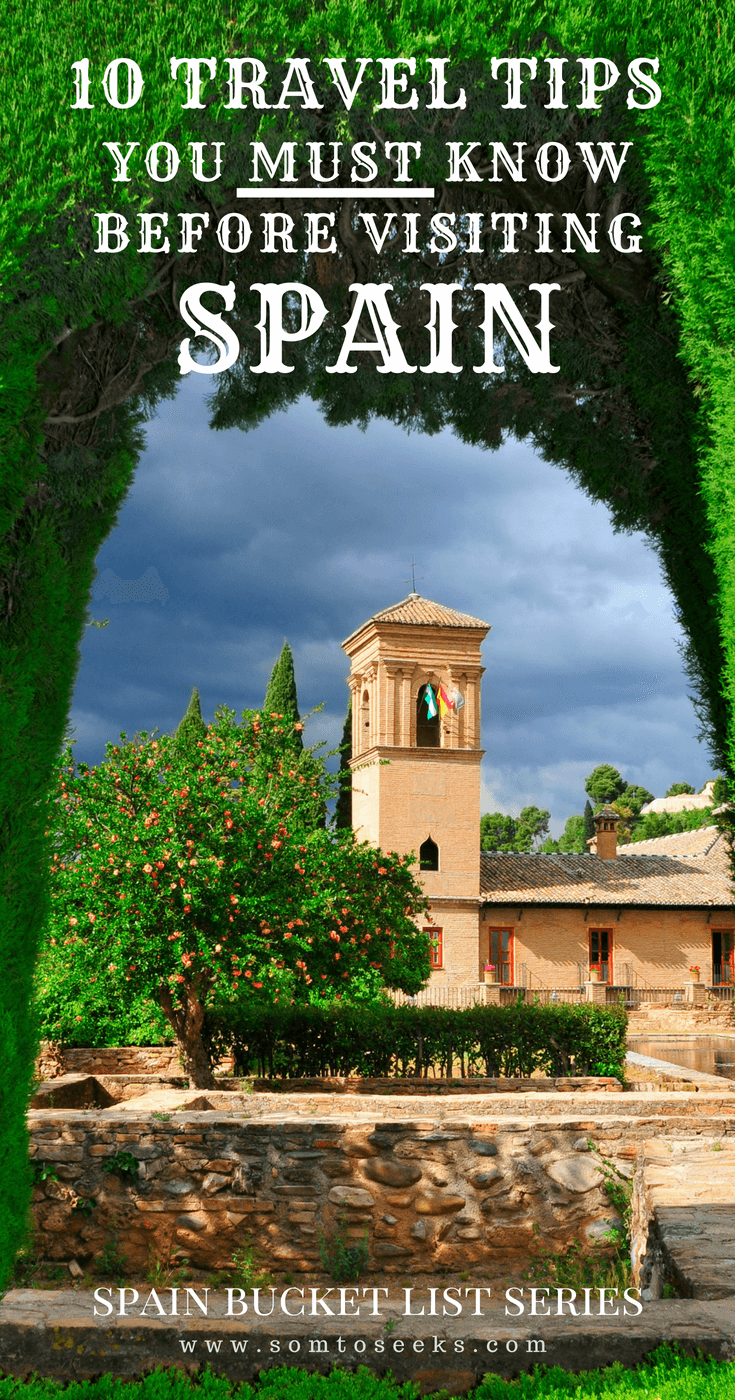 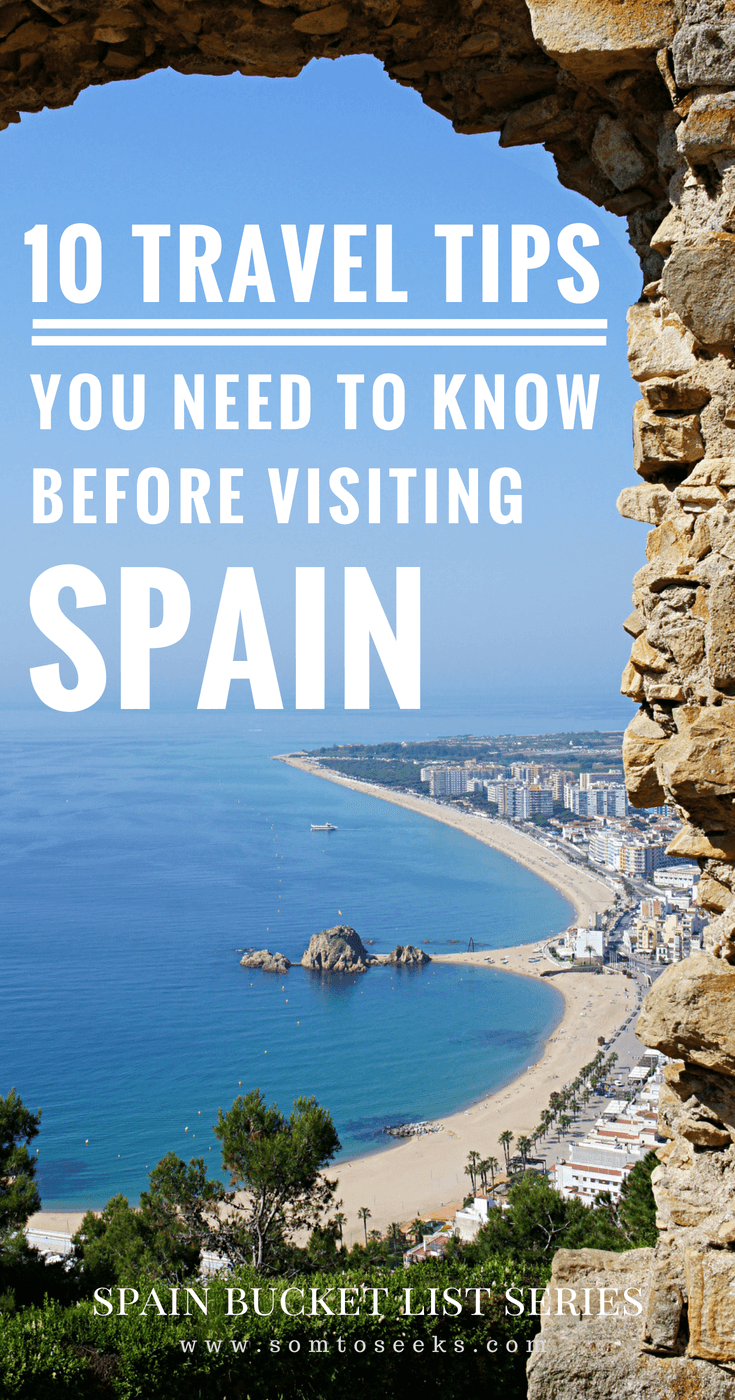