Do you know the quickest destroyers of hopes and dreams?

Self-limiting beliefs. Everyone has them. They are those pesky little voices in your head replaying negative affirmations nonstop. They tell you that you’re not smart enough. That you’re going to fail. They make you second guess your worth, your decisions, and your ambitions. I’ve been there.

In fact, my self-limiting beliefs talked me out of writing this post for a while. I thought, ‘Who do I think I am writing about self-improvement? I’m not a wellness coach or a therapist. Why should anyone care what I have to say?’

I brushed those thoughts aside and continued to write. I was getting tired of second-guessing myself so I decided to just write this darn thing! I may not be a therapist, but I’ve learned a few things about overcoming self-limiting beliefs through experience. Solo travel has been the key to overcoming the worst of them. Alone on the road for weeks, I learned that I was more resourceful and capable than I thought. I want to share my experience to hopefully inspire you to challenge your own self-limiting beliefs so they can stop holding you back.

Self-Limiting Belief #1: I am not outgoing enough.

Since childhood, I’ve been introverted and somewhat shy. I became even more shy after moving to America at age nine. Because I struggled to make friends, I usually kept to myself. I’m a native English speaker, but I still had no clue what the other kids in my 5th grade class were talking about half the time. They also thought that I, the new girl from Africa, was kind of odd. For a couple of years, I felt invisible and unwanted.

Although I now have a solid circle of friends, I still harbor this lingering belief that I am not good at socializing. When I first started traveling solo, I was worried that I’d be alone. I felt that I wouldn’t be able to strike up a conversation with other travelers. I’d be sitting in a restaurant by myself, and the other diners would think I was a loner or a loser or both.

The reality was the complete opposite. Traveling solo around Europe, I made more friends than I had back in California. I made friends at hostels, on trains, randomly on the streets, and during walking tours and pub crawls – basically in every situation imaginable. I found myself letting go of the ‘quiet, anti-social’ persona that I had come to believe was my nature. It wasn’t. I’m actually a pretty social person. I genuinely enjoy meeting new people. This realization has made me more excited and less nervous about talking to strangers.

Self-Limiting Belief #2: I keep making bad decisions. This will be another disaster.

I like to say that between 2011 and 2014 I made more mistakes than in the previous 20 years of my life. Failed classes in college? Check. Lost jobs? Check. Broke and directionless? Check. Those failures took a toll on my self-confidence and made me feel hopeless. I constantly compared myself to my friends, who all seemed to be doing better than me professionally.

Then I packed my bags and moved to Madrid, Spain to teach English and travel. I thought I was making a reckless decision but was too depressed to care. Spain had been calling my name. In the back of my mind, though, I was thinking ‘Shouldn’t I try to get a real job?’ I was already behind professionally. Moving abroad would set me back even more. What I didn’t know was that teaching English abroad would inspire me to become a travel writer. It would connect me with other independent minds living life on their own terms. It would give me the courage to look beyond a traditional 9 to 5 and find work that suits my nomadic spirit. Here I am two years later getting paid to write about my travels and moving closer to making it my full-time career.

No, moving to Spain was not a bad decision. It did not set me back at all. In fact, it gave me direction and purpose. I look back on that move as one of the boldest and smartest actions I’ve ever taken.

Self-Limiting Belief #3: I’m too nice. People will take advantage of me.

My mom used to say that I should toughen up or else I would be crushed by this mean world. Compared to my no-nonsense, assertive twin sister, I’m easygoing and gentle. In Nigerian culture, that can be seen as a sign of weakness. Surviving in Nigeria is really hard so you need to be tough and even ruthless to make it. Being nice just doesn’t cut it.

YOU MAY ALSO LIKE  The Truth about Racism in Spain: Advice for Black Travelers

After trying to toughen up with no success. I realized that I couldn’t just change my personality at the snap of a finger. So I stopped trying. Then I traveled solo. No one took advantage of me. In fact, most people I met were more than willing to go out of their way to help me. In Paris, a 40-something Danish man bought me a train ticket when I was struggling to work the machine. I was suspicious. What did he want from me? Nothing, actually. It was just plain old kindness. There is still a lot of that in the world.

Self-Limiting Belief #4: I’m too indecisive. I need someone to help me make a choice.

If you’ve ever gone out to lunch with me, you’ll know that I can take forever to make up my mind. I’ve started to look at menus before going out to eat to save time. Given my indecisiveness, I was worried that if I traveled solo I would waste a lot of time trying to decide what to do and end up not doing much.

Wrong! Case in point: during my three day solo trip to Germany and Austria, I…

1) Had a few pints at Spring Fest (the spring version of Octoberfest) in Munich.
2) Toured the Sound of Music filming locations in Salzburg.
3) Got lost at the Salzburg Fortress (it took me a good 45 minutes to find the exit.)
4) Visited the Dachau Concentration Camp.
5) Visited Mozart’s birthplace.
6) Ate wienerschnitzel for the first time.
7) Fell in love with German wheat beer.

There was no indecisiveness at all. I am a planner so I mapped everything out ahead of time. Once I got to my destination, I was constantly on the move. Solo travel can help you become more proactive. Everything is up to you so you have to take charge. You learn to trust your intuition and your decision-making process.

Self-Limiting Belief #5: I can’t find directions to save my life.

This one is kind of true. Remember that I got lost at the fortress in Salzburg? But solo travel made me realize that I wasn’t as directionally challenged as I had thought. About 90% of the time, I knew exactly where I was going. In 22 days, I traveled through the U.K., Croatia, Italy, and Greece. I didn’t get lost even once! I was so proud of myself.

YOU MAY ALSO LIKE  12 Common Blogging Mistakes To Avoid: Lessons from 12 Months of Blogging

The bottom line is that traveling solo forced me to confront myself in the most unfiltered way. I couldn’t hang onto the comfort of my friends or siblings. It was just me and the beliefs in my head. I learned that I am a resourceful, strong-willed lady who can do things for herself. When those self-limiting beliefs creep up, I remind myself of those times when I traveled solo like a boss. 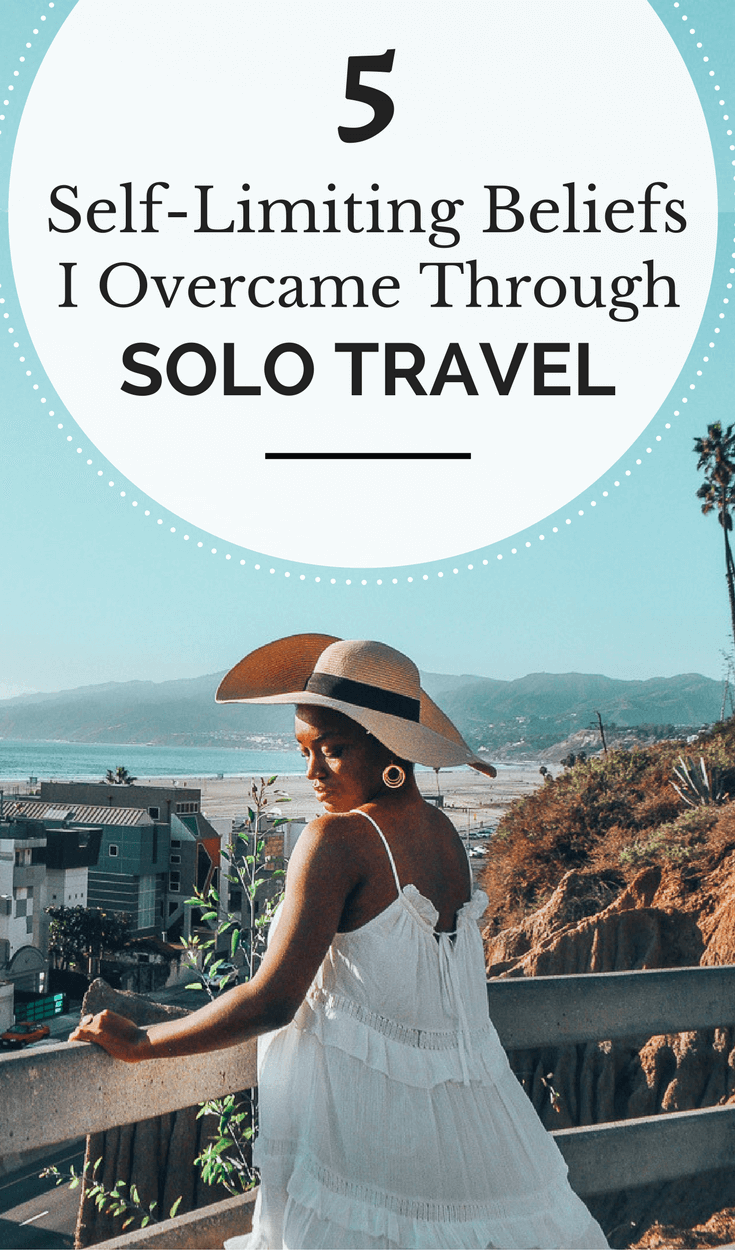 Read more about my solo travels