8 Most Underrated and Beautiful Places You Must Visit in Spain

Every list of top places to visit in Spain includes the usual suspects – Barcelona, Madrid, Sevilla, maybe Valencia. But Spain is brimming with beautiful, lesser-known destinations you shouldn’t overlook! If you’re looking for more exciting destinations to add to your Spain itinerary, here are the 8 most beautiful and underrated cities in Spain to visit.

This is the seventh part of the Spain Bucket List Series. Here’s the complete series:

Granada is the one city you really must visit in Spain. Seriously, forget Madrid or Barcelona. While they offer plenty of great attractions, Madrid and Barcelona are too touristy and commercial for you to have a traditional Spanish experience, if that’s what you’re looking for.

A mosaic of Muslim, Christian, and Jewish cultures, Granada is home to some of the most iconic architecture in Spain. You can’t leave the city without visiting La Alhambra, a 900-year-old palace and fortress that housed the Muslim kings. The intricacy of the designs will live you in awe! Be sure to do a guided tour if you can.

A UNESCO World Heritage Site, La Alhambra also provides incredible views of the entire city of Granada. Across from it is the Mirador de San Nicolas, a great viewpoint to see La Alhambra while enjoying some impromptu Flamenco performances. There are also some bars and restaurants there where you can enjoy dinner while watching the sunset over La Alhambra.

You also have to see a Flamenco show in Granada! Andalucia is the birthplace of Flamenco so the performances you’ll see there are the most authentic in Spain. In Granada, there are cave bars in the Gitano (gypsy) district where Flamenco dancers perform with unmatched intensity and gusto. Highly recommended!

Granada is perfect if you’re looking to experience the essence of the Spanish lifestyle in a not-so-touristy environment. This city is undoubtedly traditional and true to its roots. You won’t find many restaurants and stores catering just to tourists, only tours. Go to Granada! You’ll thank me later. 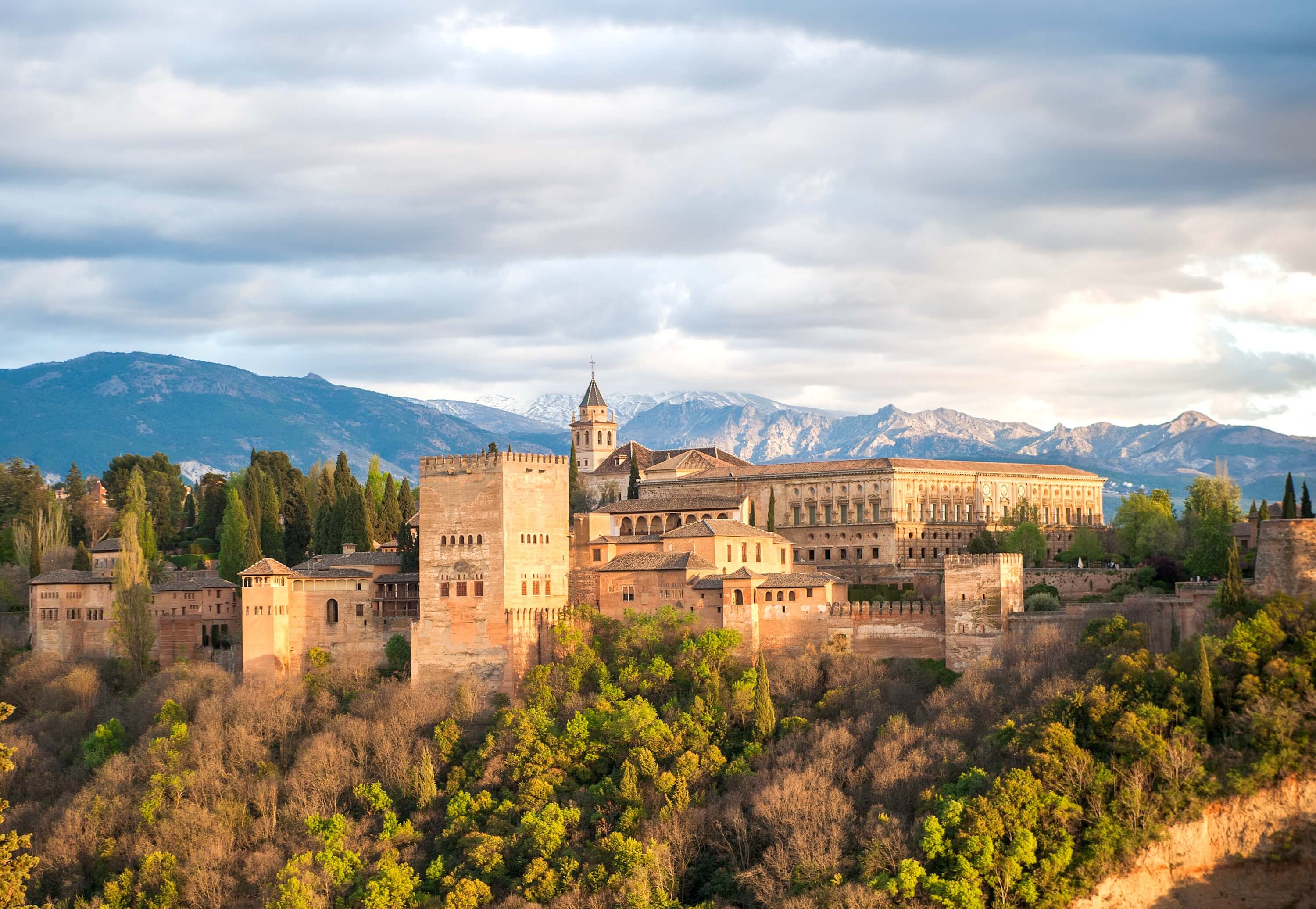 Just 2 hours west of Granada is Córdoba, a perfect escape for history buffs and architecture lovers. Even the entrance to the city is a work of art. It was in Córdoba that the Spanish monarchs, Isabella and Fernando, gave Christopher Columbus the official blessing to go and explore the new world. In its golden age, Córdoba had 1 million inhabitants and was a major trade center in Spain. With its colorful streets and grand architecture, Cordoba is easily one of the most beautiful cities in Spain.

Today, Córdoba is a calm city of 300,000 with some of the best-preserved remnants of both the Moorish era and the reconquest of Spain. The top place to see is La Mesquita de Córdoba, a mosque-turned-church in the Old Town. After that, you need to go to the Jewish quarter and snap some photos of the beautiful white homes with blue flower pots. Stunning! Cordoba is one of those cities in Spain where every corner is picture perfect. The Roman Bridge that leads into the old city provides an amazing backdrop for photos. Cordoba is small so you can see the highlights on a day trip. 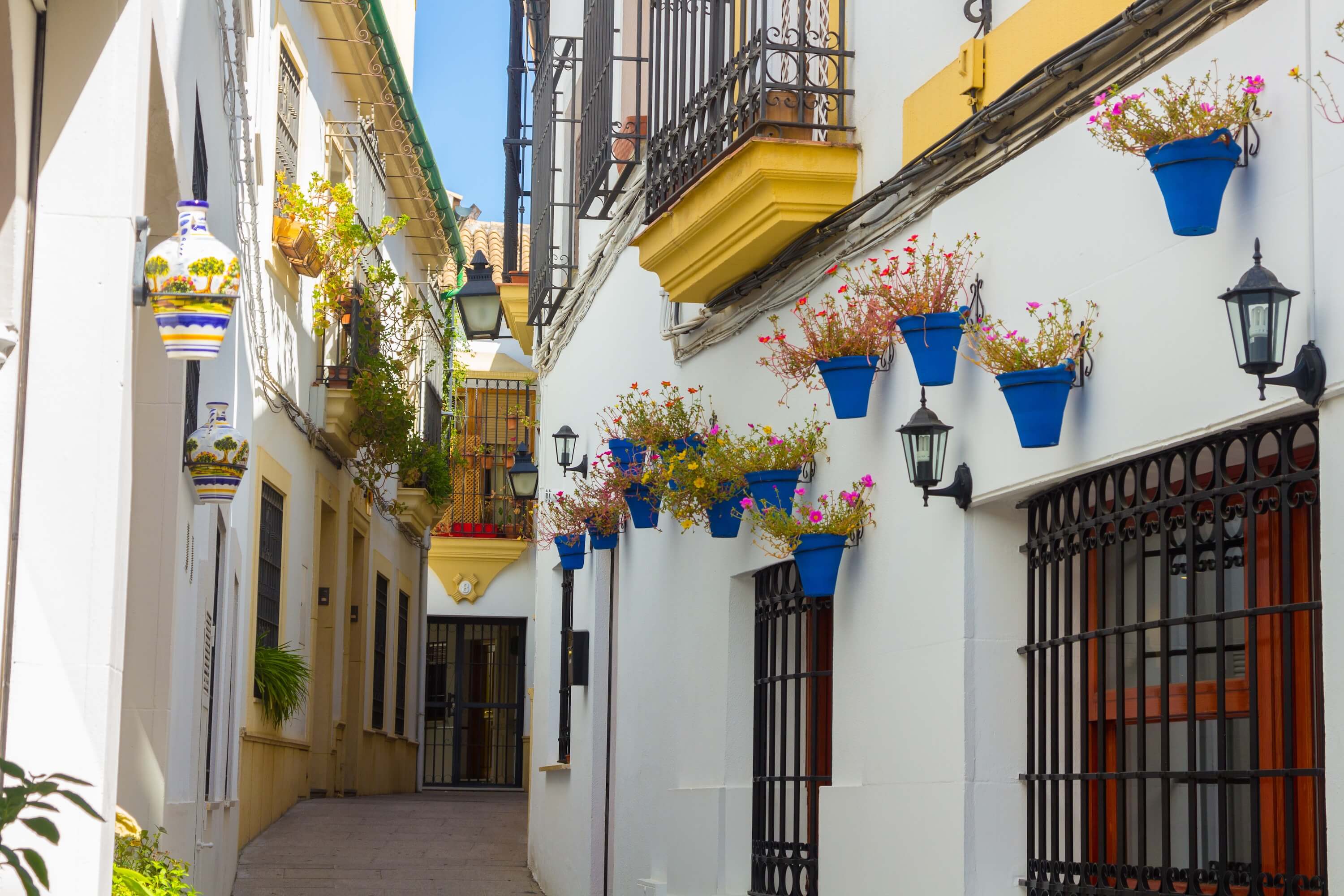 The northwestern region of Galicia is beyond underrated, and so is one of its largest cities – Vigo. The best reason to go to the port city of Vigo is to visit the Cies Islands. These islands are a protected natural habitat with some of the best beaches in Spain. With stunning beaches, great food, and Galician culture, Vigo is one of the most unique places to visit in Spain.

In fact, a few years ago, National Geographic named the Cies Islands’ Rodas Beach as the best in the world! I went there and wouldn’t completely agree, but it’s still among the most pristine beaches I’ve visited. Because the islands are protected by the government of Galicia, they are virtually spotless and the British water is a deep green. You even need to obtain a permit to visit these islands!

Besides the Cies Islands, Vigo has a charming old town with views of the Atlantic coast. Like the rest of Galicia, it is famous for its seafood, particularly pulpo (octopus.) Vigo is a large city but most of the attractions are concentrated by the coast. You can see the city in 2-3 days. 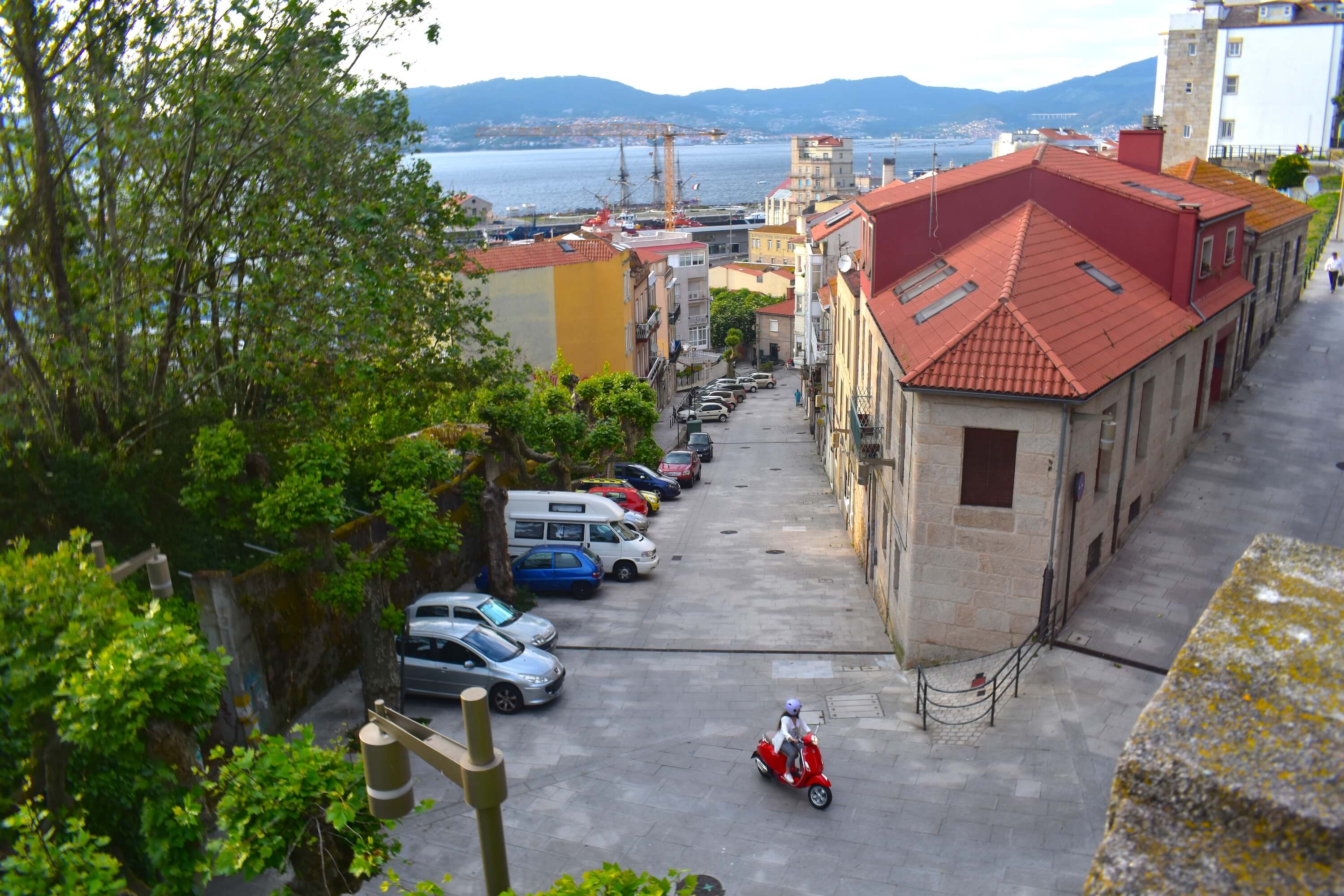 First, let’s talk about the food. Head to Rua Franco in the Old Town for the best seafood of your life. Seafood restaurants of every kind line the streets. You can order a mariscada, a large tray of mussels, clams, shrimp, scallops, and lobster for two plus drinks. The price? Just 15 euros each. My friend and I shared a seafood feast at Bodegon de Xulio. If you want to try the famous pulpo, head to a restaurant called Bodegon os Concheiros. It’s about a 15-minute walk from Rua Franco.

YOU MAY ALSO LIKE  Spain Foodie Guide : 6 Dishes To Eat in Spain Besides Paella and Tapas

While in Santiago de Compostela, you will also want to see the iconic cathedral where the Camino de Santiago ends. Spain is home to tons of cathedrals, but this one is on another league in terms of design and grandeur. The Baroque design inside is equally breathtaking. 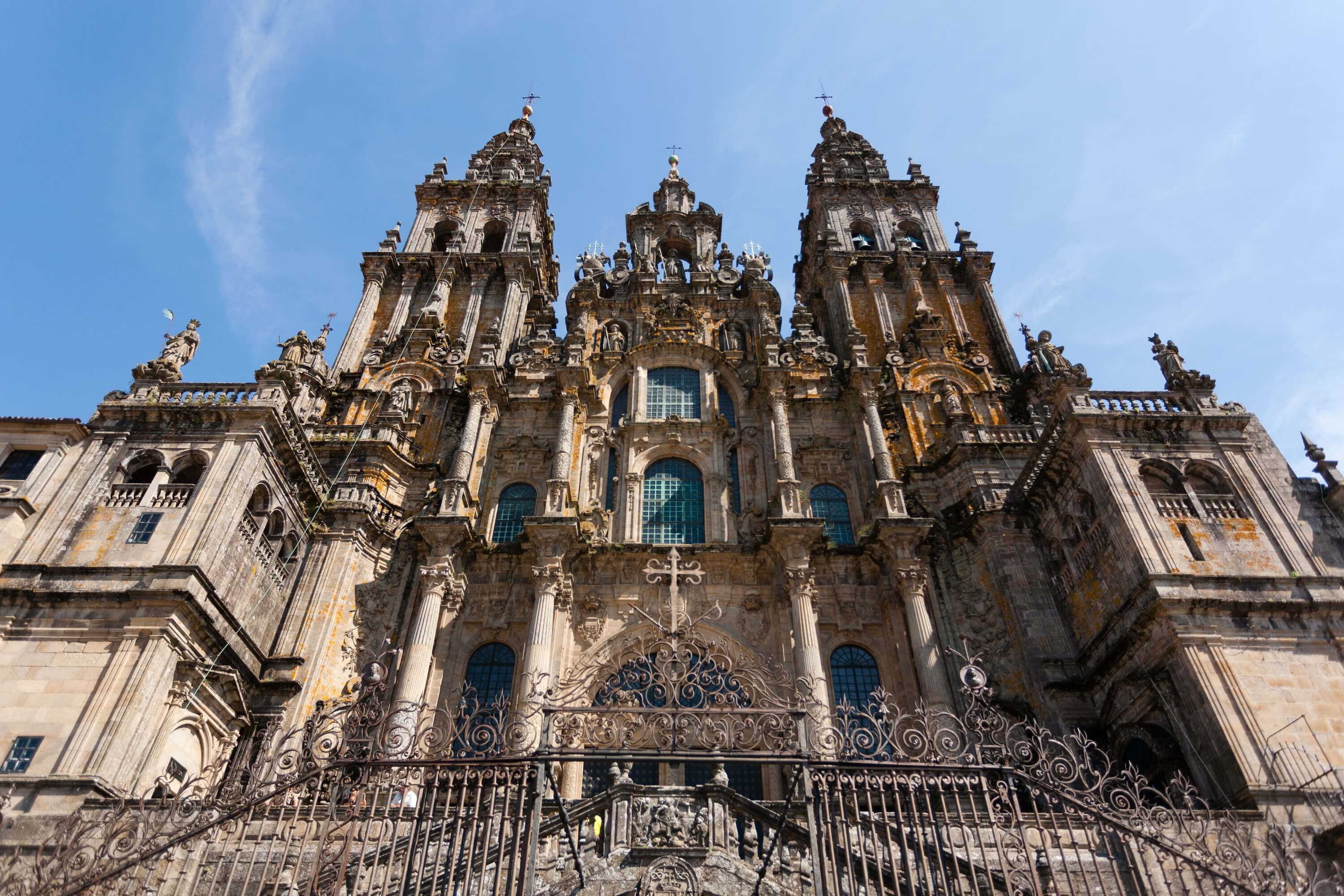 I might be a bit biased because I studied abroad in Bilbao for 5 months, but this Basque city doesn’t get as much love as it deserves! Bilbao is a quaint, green city with rolling hills, rivers, and a super laid-back atmosphere. It feels more like a big town than a city. Bilbao is one of the most unique places to visit in Spain. Seriously, there is nowhere else like it!

Although it’s most famous for the Guggenheim Museum, the best thing about Bilbao is the pace of life. Spaniards, in general, tend to live a leisurely way of life. In Bilbao, people are even more carefree, although somewhat reserved. The city has a big bar culture. Bar hopping is a daily affair in the evenings, and the drinks are ridiculously cheap (although not as strong for some reason.) The tapas bars are some of the best I’ve been to in Spain, after 3 visits and 16 months traveling around the country. The only contender that comes close is nearby San Sebastian.

Another not-so-known fact about Bilbao is that it has some beautiful surrounding beaches. The nearby towns of Getxo and Algorta, just a 20-30 minute train ride away. You can take surfing lessons at the beach in Algorta. 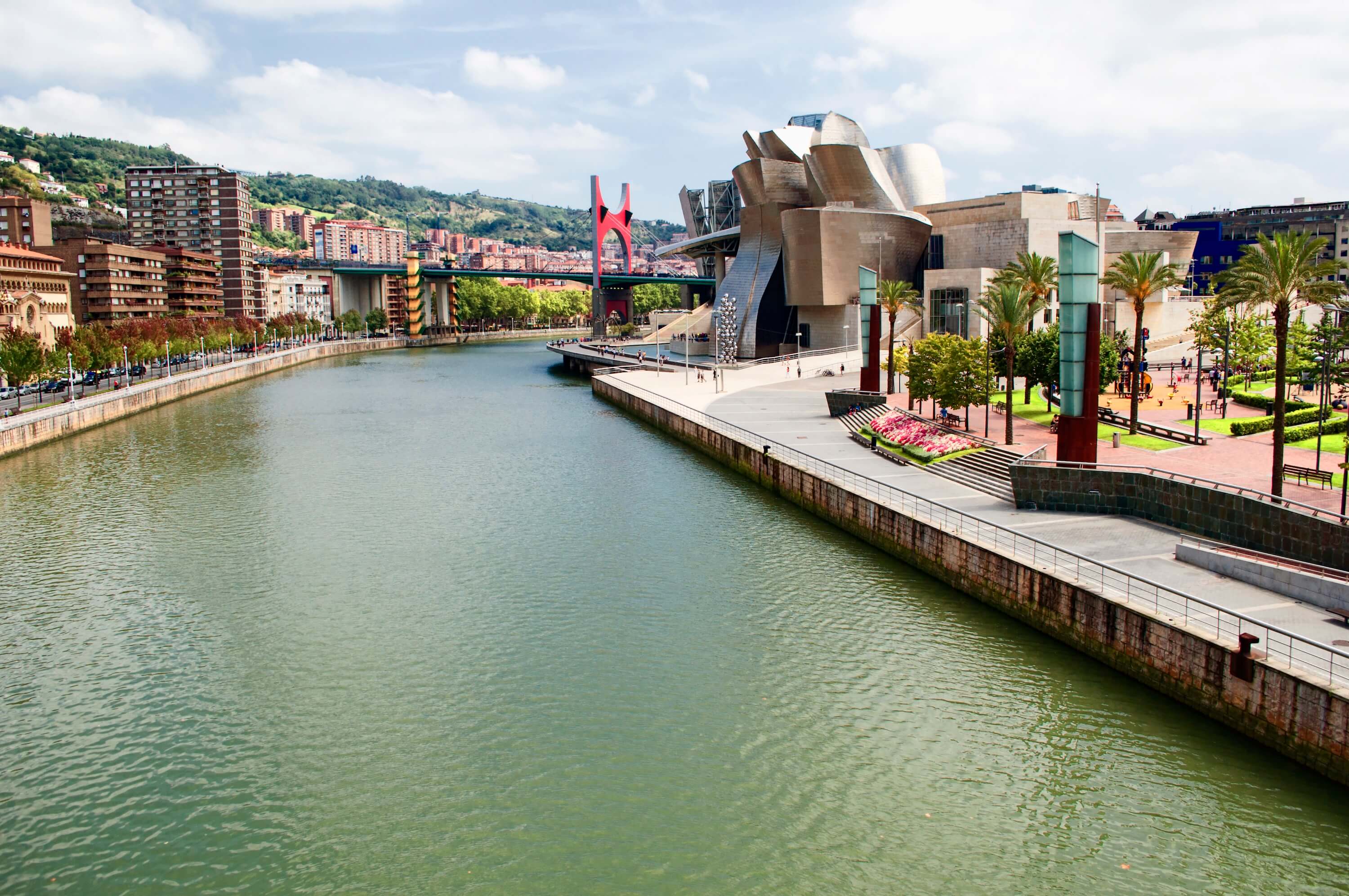 Toledo is a perfect day trip from Madrid. Just a 20-30 minute train ride, this city is full of picture-perfect streets and architecture. In fact, the entire city is a UNESCO World Heritage Site due to the large number of historical monuments there. Perched on a hill and surrounded by a gorgeous landscape, Toledo is easily one of the most beautiful cities in Spain.

Toledo was ruled by the Romans, Visigoths, and Arabs so you will see the influence of all three cultures throughout the city. Some of the top sights to see are the Alcazar de Toledo (Muslim palace), Monasterio de San Juan de los Reyes (gothic monastery), Museo del Ejercito (military museum)

When I visited Toledo, I had lunch at El Trebol, a cave restaurant not too far from the Museo del Ejercito. I highly recommend it – great food and cool atmosphere. 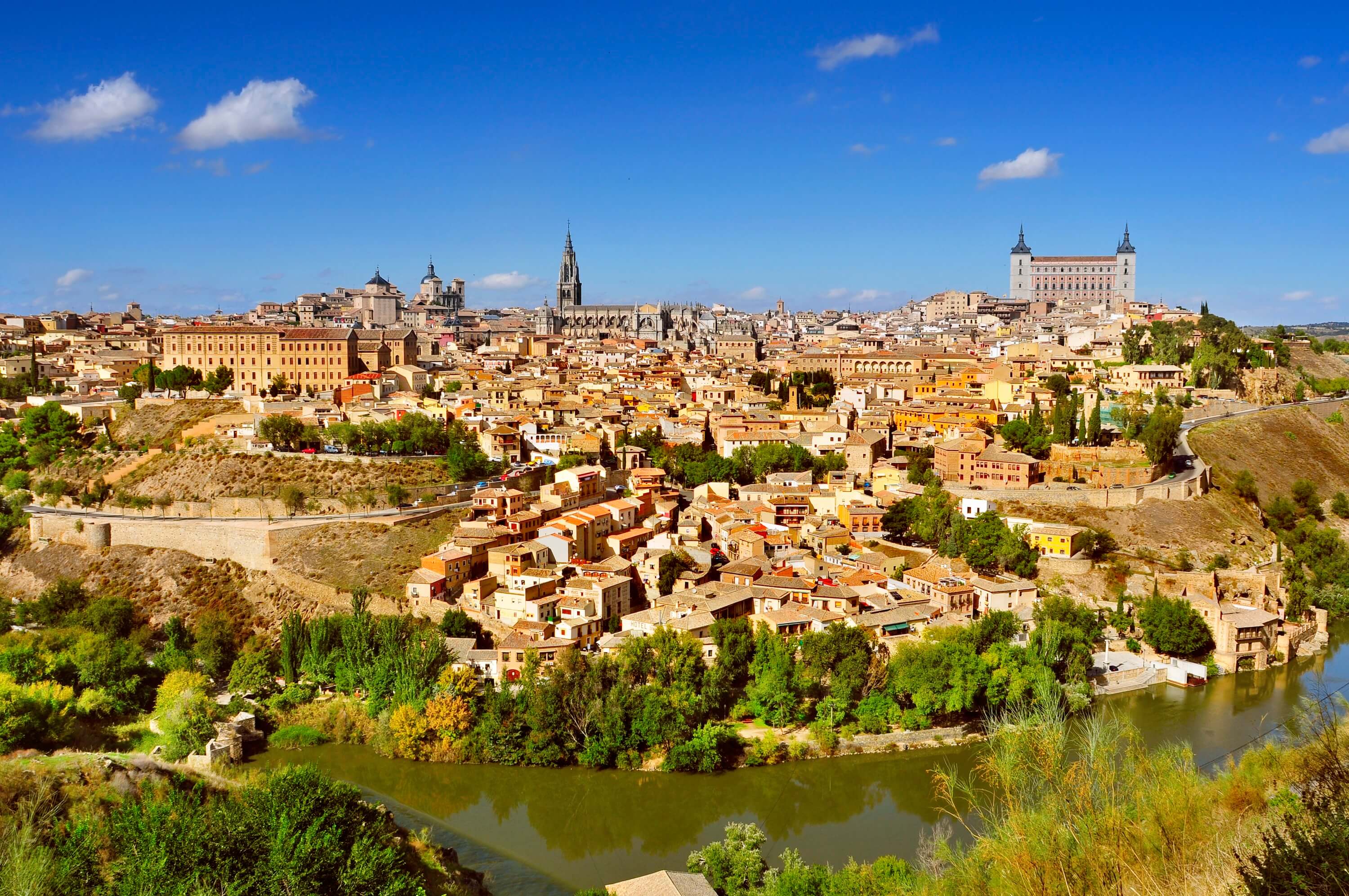 Segovia, which looks more like a kingdom than a city, is most famous for its Roman aqueducts and Gothic architecture. The biggest reason to visit, though, is the castle. Did you know that the Alcazar de Segovia (Castle of Segovia) was the inspiration behind the castle in Cinderella? Google it. They are virtually identical. This castle alone makes Segovia one of the best cities to visit in Spain.

Just a one hour drive from Madrid, Segovia is a perfect destination for a day trip. You can see the city in one day because it’s small and compact. Besides the aqueduct and the castle, Segovia is home to dozens of gothic monasteries, churches, and chapels. Some notable ones include La Iglesia de Esteban, La Iglesia de San Martin, El Monasterio de Santa Maria de Parral. Segovia is also famous for one dish: cochinillo (suckling pig.) If you eat meat, you can’t leave Segovia without trying that dish!

Spain Foodie Guide: 6 Dishes To Eat in Spain Besides Paella and Tapas

Last but not least, we have Zaragoza. This city, located in the region of Aragon and not far from Barcelona, is virtually unheard of among tourists in Spain. It’s such a shame because Zaragoza is such a charming city. It’s also not touristy at all so you can visit here if you want to escape the crowds in Barcelona.

La Basilica de Nuestra Senora del Pilar (Basilica of Our Lady of Pilar) is the most awe-inspiring church I’ve seen in all of Spain! Located next to the Ebro River, the largest river in Spain, this Basilica has Gothic and Roman influences. You can purchase a ticket for around 3 euros and go to the top of the church to get a bird’s eye view of the city. The roof of the church is a work of art in itself! Zaragoza is small and walkable so it’s a great day trip destination from Barcelona or Madrid.

Every October 12, Zaragoza celebrates the Fiestas del Pilar in honor of its Patron Saint. Thousands of people descend on the city for the festivities, which include parades, fireworks, and lots of beer. This makes Zaragoza another one of the most unique places to visit in Spain. 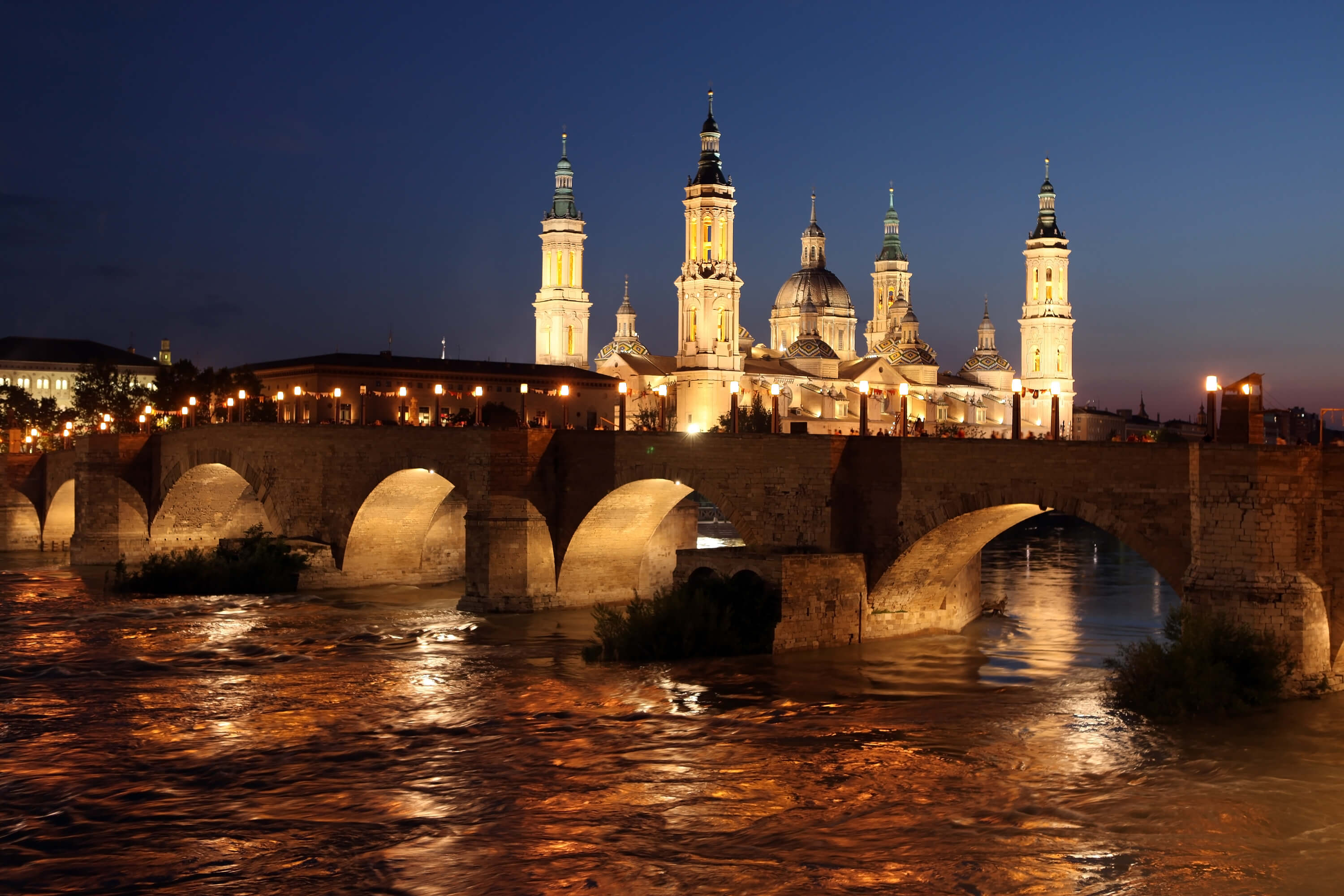 There you have it – the 8 most beautiful and underrated cities in Spain to add to your bucket list. How many of them have you visited? Comment below. 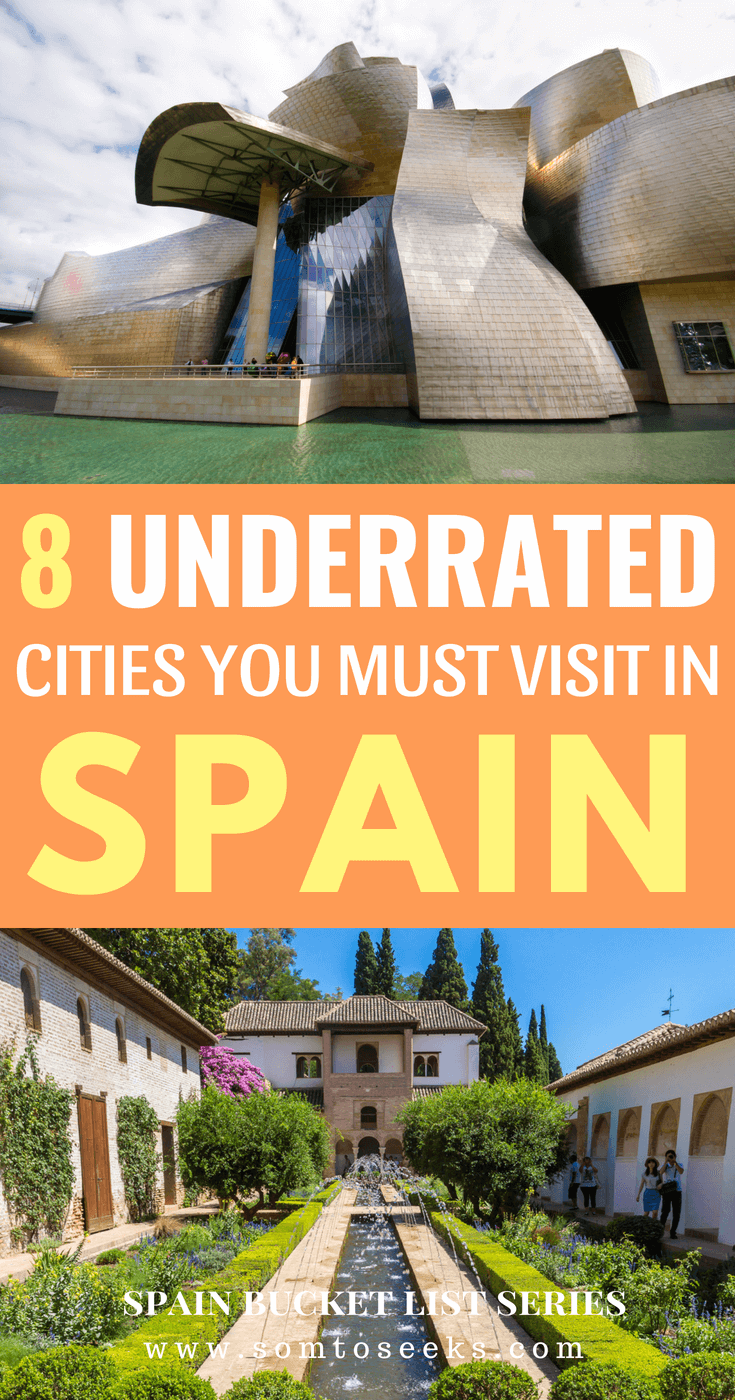 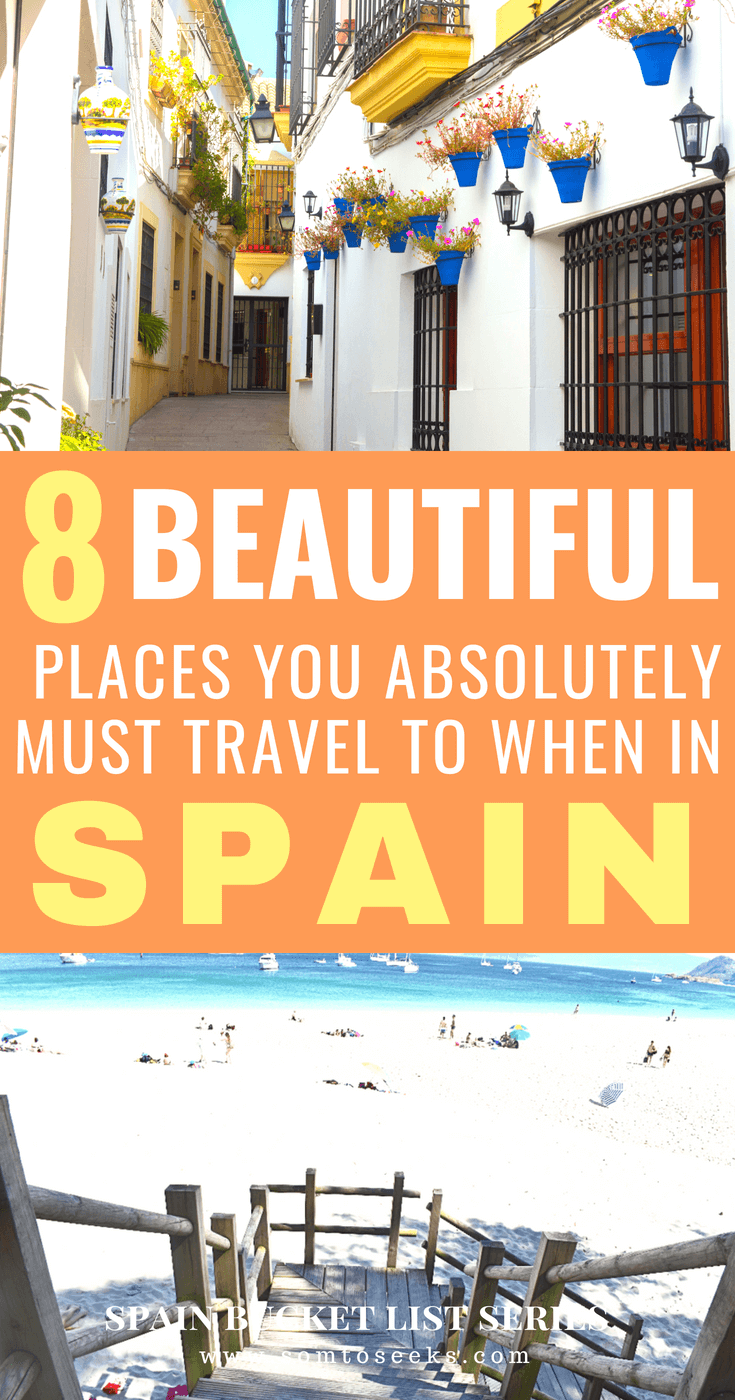 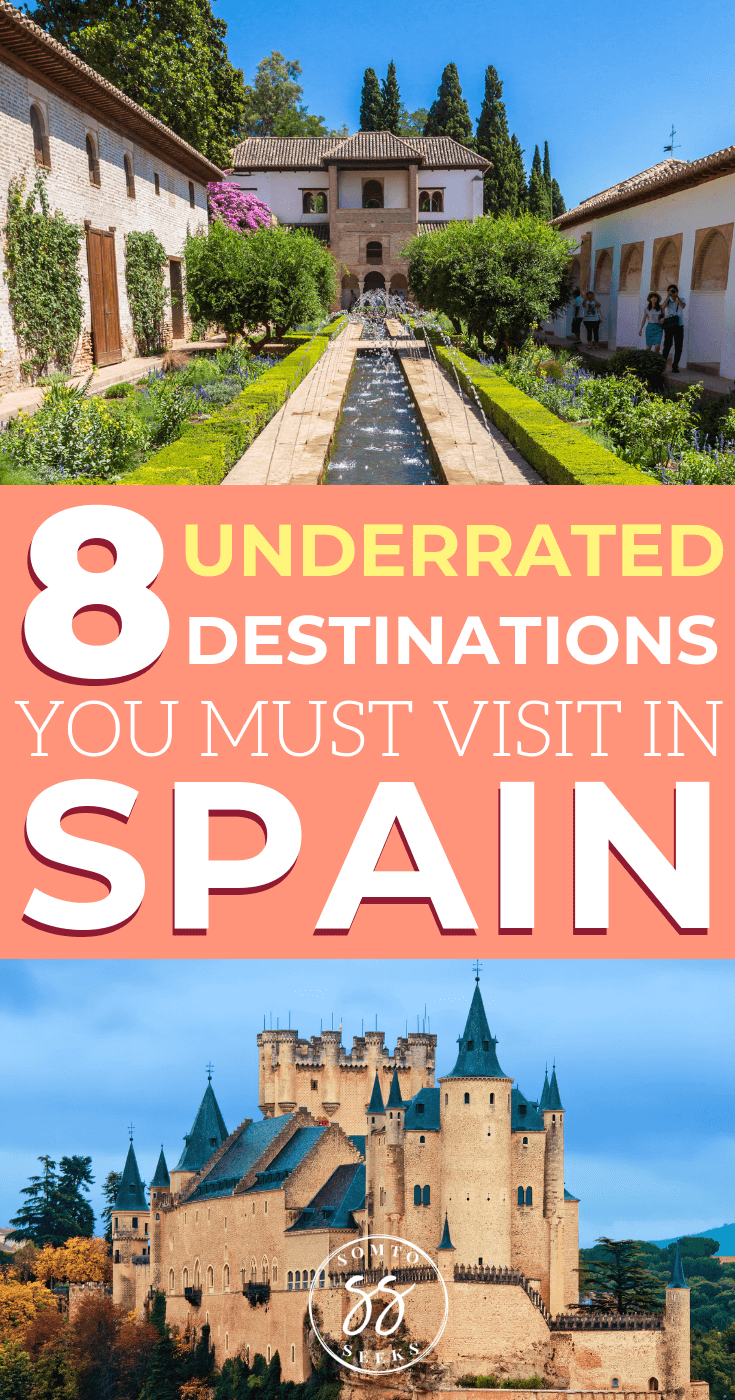 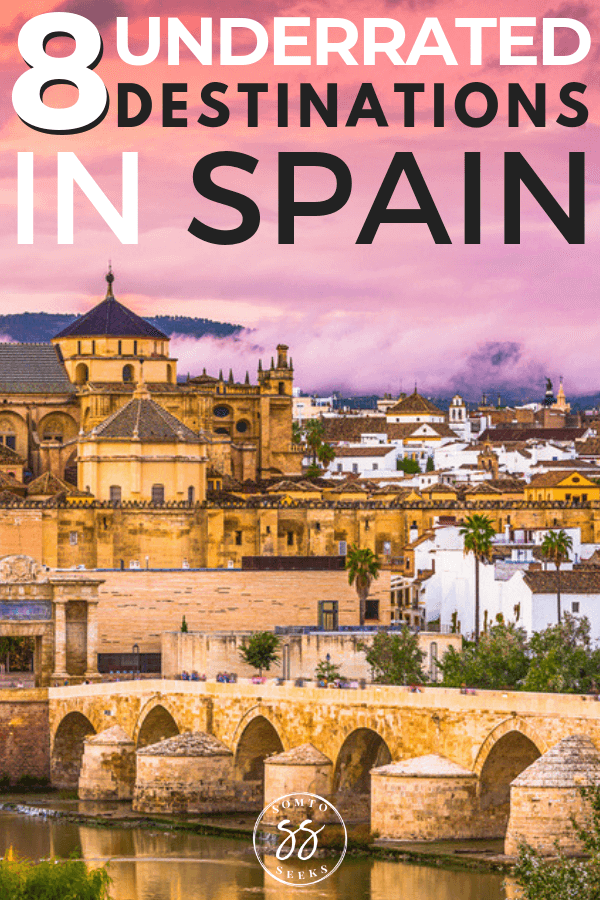 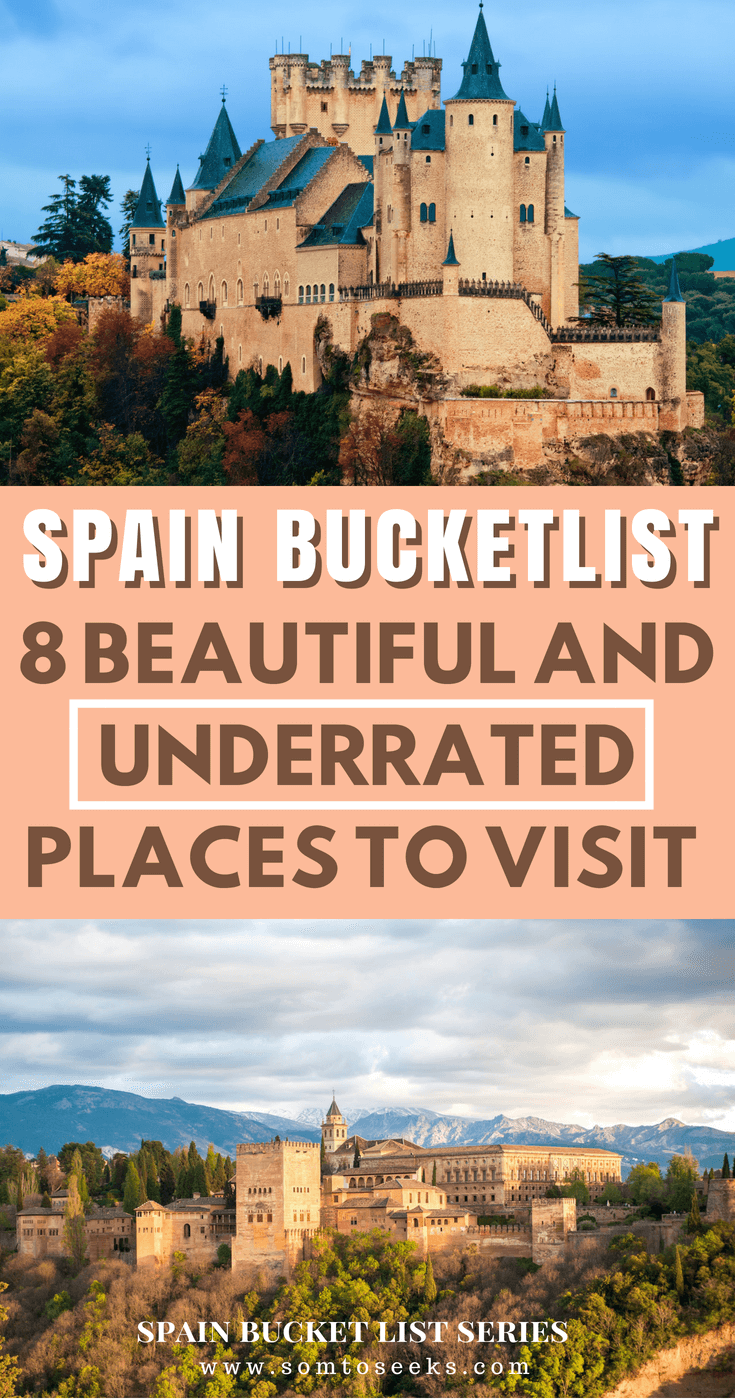 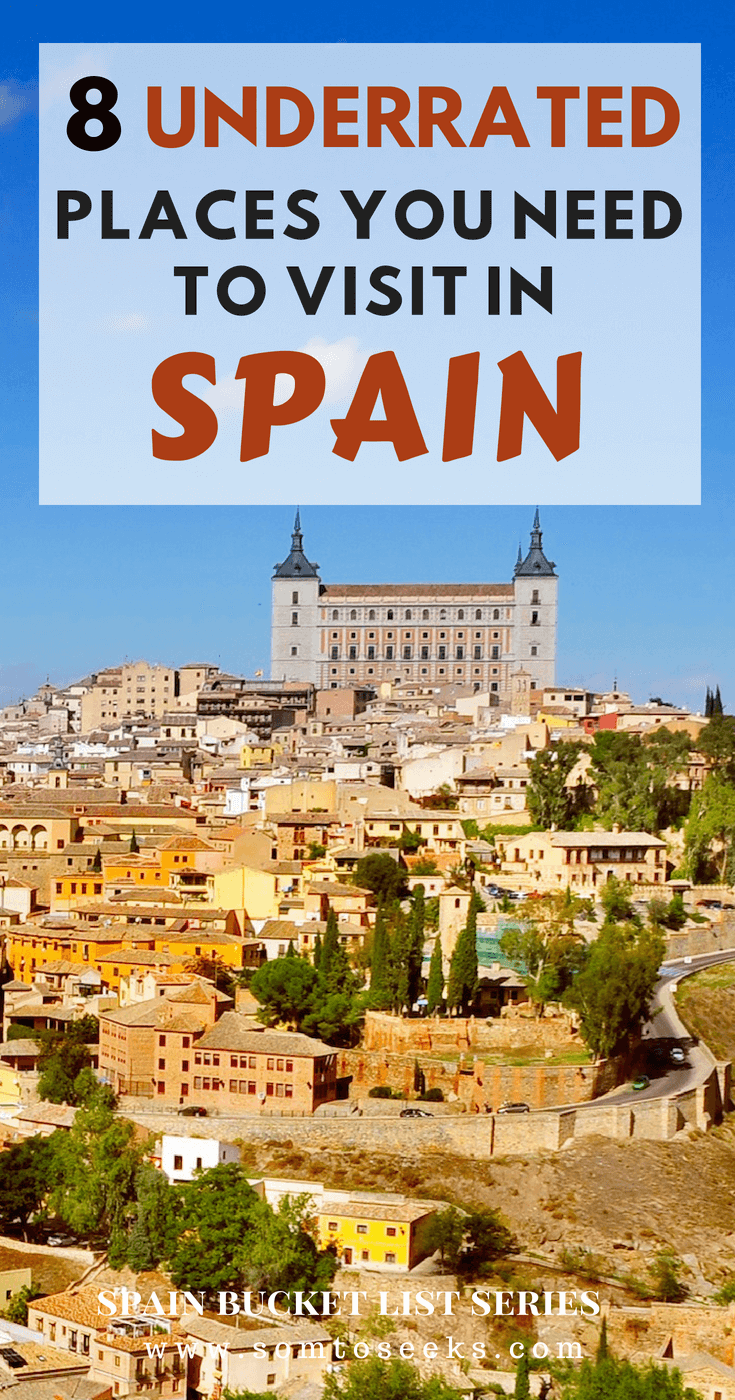