How To Experience Positano, Italy as a Female Solo Traveler

As I stood at the top of a hill opposite Positano’s iconic cliffside, I felt like I was in a dream. I thought to myself, ‘This has to be the most beautiful place I’ve ever seen in my life!’ Colorful bungalows and villas were perched on the cliff, stacked upon one another in an asymmetrical fashion. The houses cascaded down to the base of the cliff, a pebble stone beach. There is a saying that when people from the Amalfi Coast go to heaven, they will not notice any difference. I don’t remember where I heard that, but my experience driving to Positano and exploring its hilly landscape makes me believe it 100%. Positano’s ethereal beauty and maze-like landscape make it the perfect place for a solo female traveler to wander for a few days. Here’s what you can expect on a solo trip to Positano. 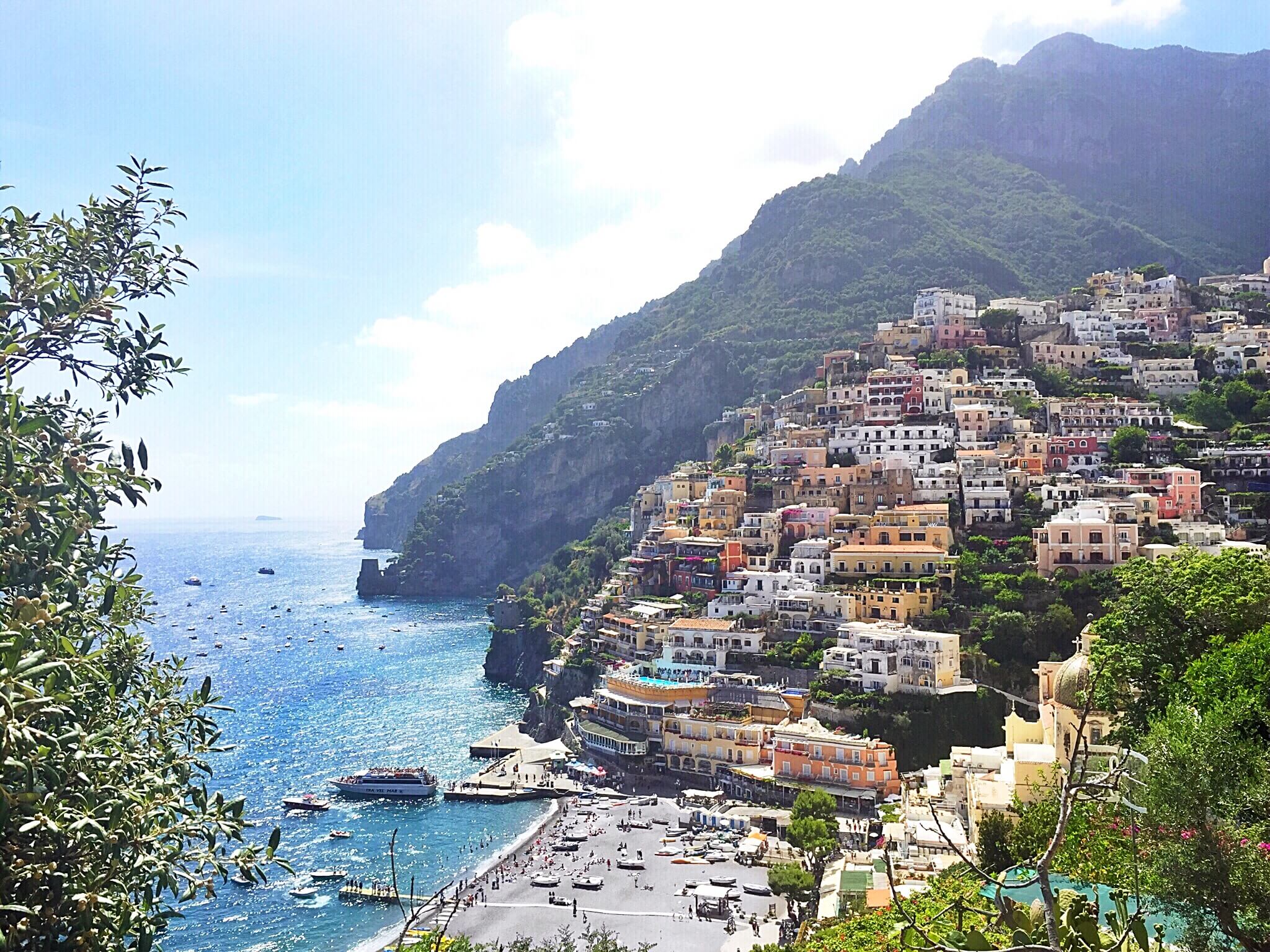 The drive to the Amalfi Coast will take your breath away!

The drive to the Amalfi Coast alone is enough of a reason to make a trip down to Positano. Seriously, it is out of this world. Getting to Positano, though, is kind of a long process – a 5-hour bus ride to be exact. I caught a 7:00 am Marozzi bus from Rome Tiburtina Station. It is the only direct route to Positano. The other options would be to go through Naples or Salerno – more on that in a bit.

Although it felt like an eternity, the bus ride was actually really pleasant. The first route was Rome to Sorrento. On the way, we passed Pompeii, Mount Vesuvius, and the absolutely jaw-dropping Bay of Naples. [Tip: sit on the right of the bus! I wish I had] Then in Sorrento, the bus driver asked all those who were Positano-bound to switch to a smaller bus. That’s when the real adventure began! The following two hours consisted of traversing winding, narrow roads high up in the mountains. This is definitely not for the faint of heart! It was a two-way road, and there were large buses coming from the other side. This meant our bus driver had to stop, reverse, and move closer to the cliff to make way for the other bus. There was simply not enough space on the road for both buses to pass at the same time.

YOU MAY ALSO LIKE  One Day Madrid Itinerary: Best Things To Do, See, and Eat

How to travel to Positano

There are three main ways to get to Positano. Let me break it down for you.

Directly from Rome – this was the option I chose. It is also the cheapest option. A two-way bus ticket to and from Positano cost about $55. I purchased my tickets ahead of time on the website of the bus company, Marozzi. Then I stayed in a hostel in Rome within walking distance to the Tiburtina Station, where the bus departs. The departure time was 7:00 am, but the bus didn’t arrive until around 7:30 am.

Naples to Sorrento to Positano – From the Naples airport, you can take a direct shuttle to Positano for $100. I’m sure you don’t want to spend that so the other option is to take the Circumvenssia train (this is the regional train in southern Italy) to Sorrento. Then from Sorrento, you can take the local SITA bus or the ferry directly to Positano.

Salerno to Positano – the national train system, Trenitalia, goes to Salerno, which is about an hour and a half from Positano by car. From the Salerno train station, you can take the SITA bus to Amalfi. In Amalfi, you’ll transfer to another SITA bus that goes to Positano. You can also go to the port of Salerno and take a ferry directly to Positano. 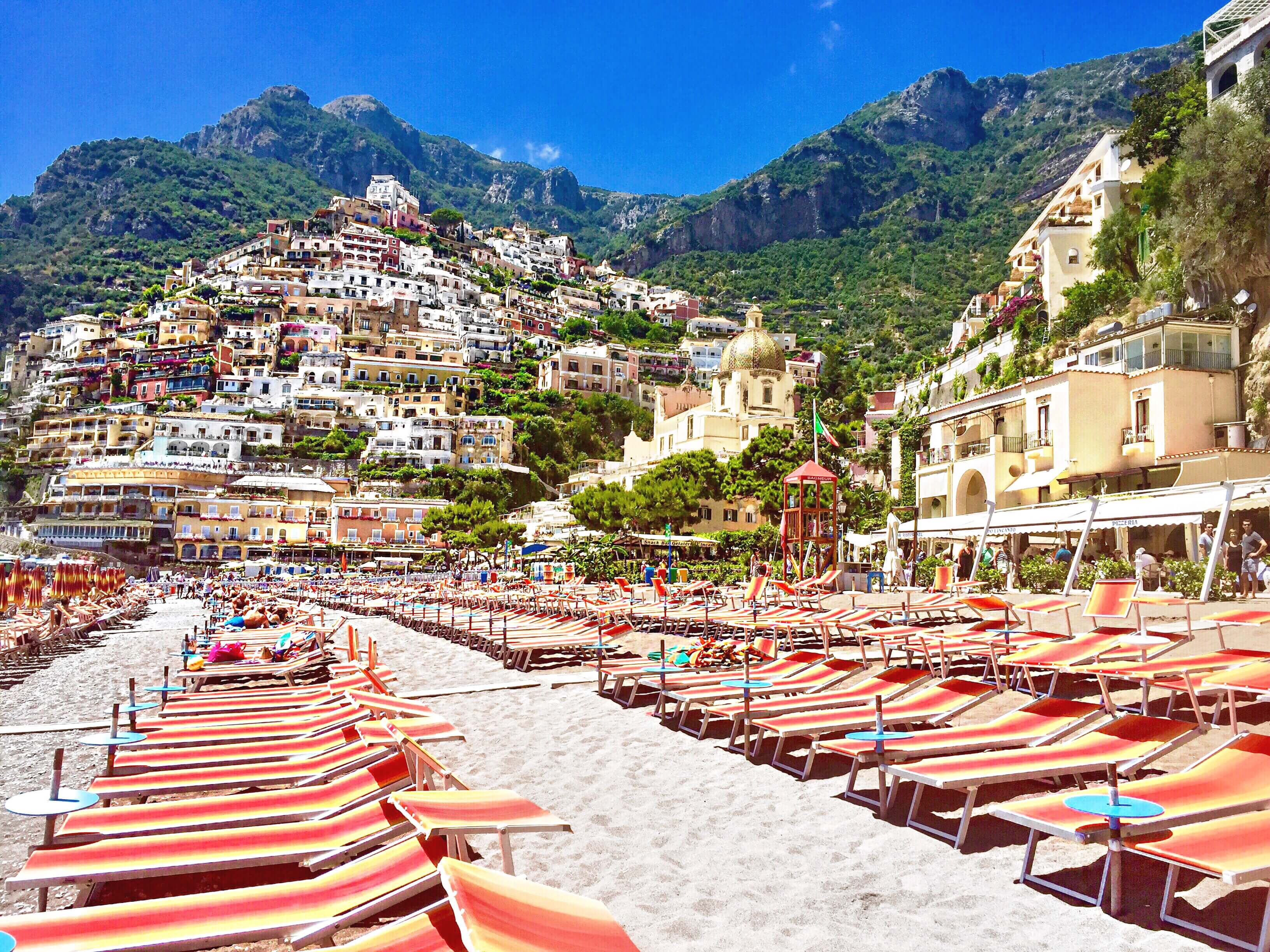 You may also like: Unexpected Encounters on My Solo Trip To Santorini, Greece

Where to Stay in Positano

When I arrived in Positano, I spotted my hostel, Hostel Brikette, right away. It was just a few yards up the street from the bus station and is also the only hostel in town. It cost about 50 euros per night, which is expensive for a hostel but super cheap for Positano. This town is a ritzy vacation spot for the wealthy so hotels range from $300-$4,000 per night during the summer. If you don’t want to stay in a hostel, there are a few boutique hotels that are also affordable, such as Casa Albertina, Hotel Savoia, and Hotel Villa Gabrisa – prices at these locations range between $200-$300 per night depending on the season.

YOU MAY ALSO LIKE  3 Day Madrid Itinerary: Things To Do for First-Timers 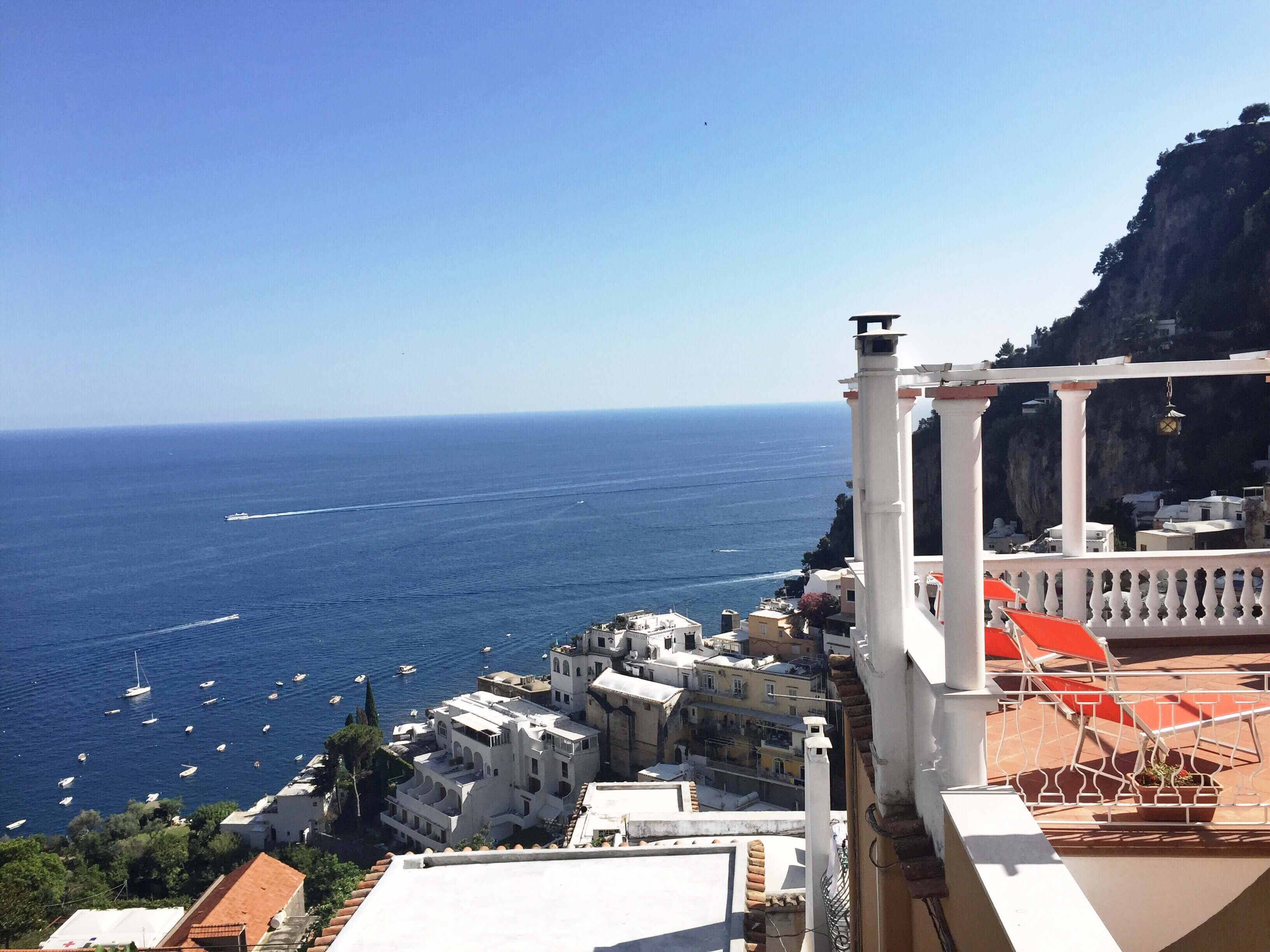 What to do in Positano

There isn’t actually much to do in Positano but lounge on the beach and admire the scenery. There are also some great Italian restaurants in the town – Chez Black is a favorite. You will have to shell out some money for food and drinks because almost all the restaurants are upscale. Positano is a fantastic place for shopping so make sure you leave room in your luggage. The town is known for its quality leather goods! I found some affordable ones too – around the 20-50 euro range. I learned that there are some hiking trails in the area, but I’m not a hiker (going up and down the cliff side was enough of a workout for me!) 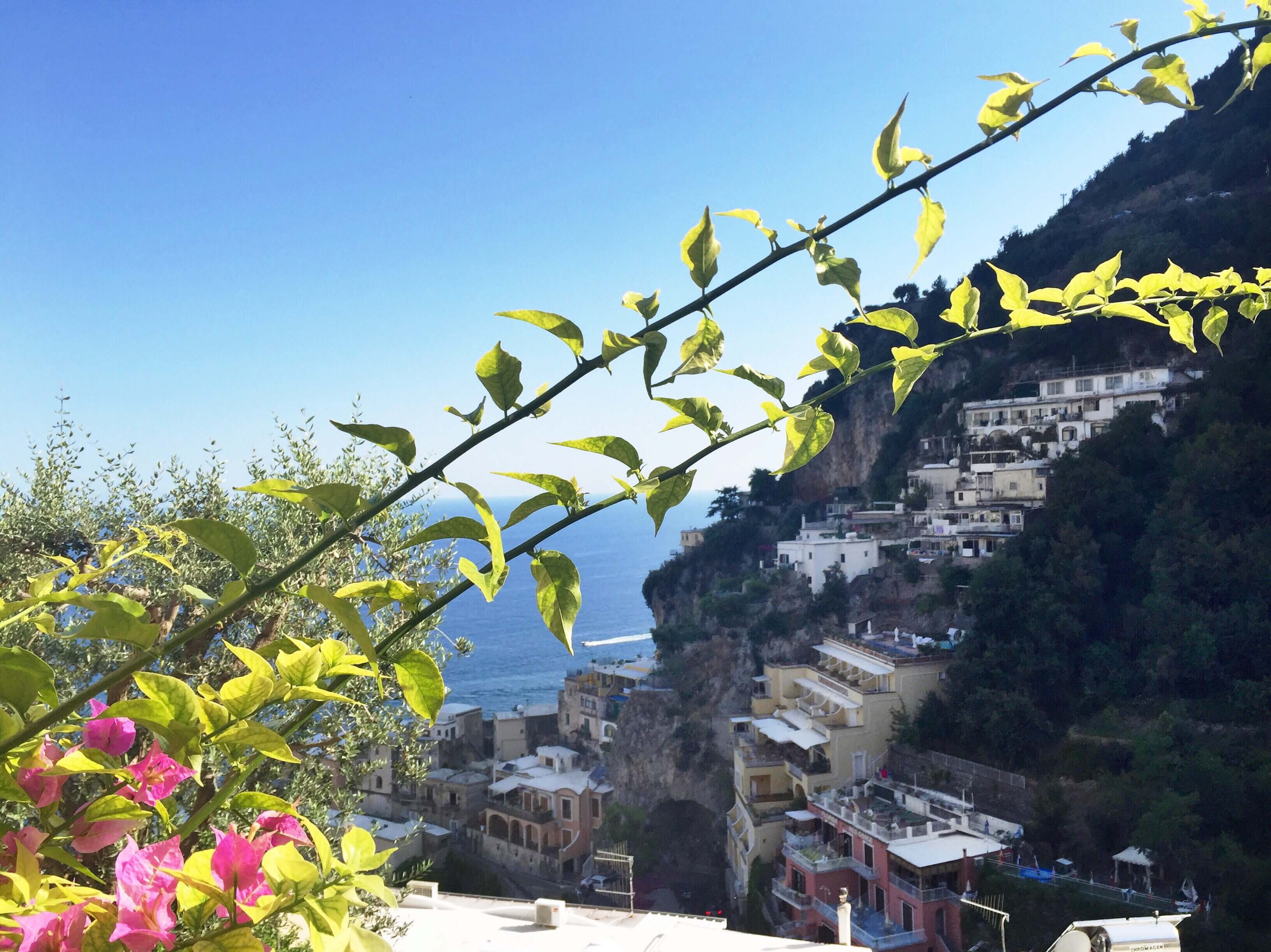 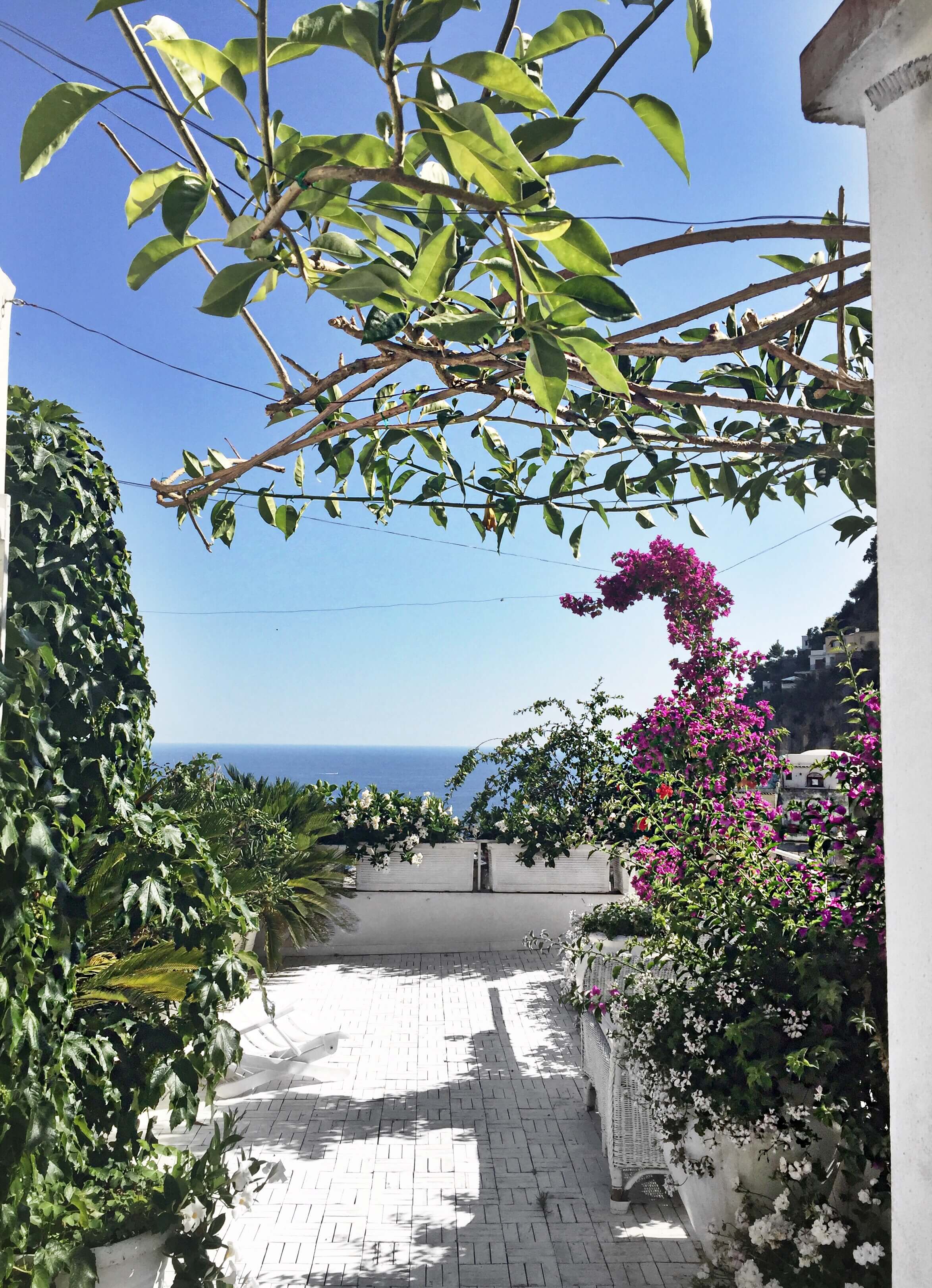 One of my main reasons for going to Positano was just to take photos of the gorgeous landscape. I spent a lot of time walking around trying to find different angles. My pursuit of the perfect angle led me to the location I mentioned at the beginning, which I believe is the best vantage point to take photos of the town. You see, it took me a good minute to find that place. I had seen it in lots of photos and wanted to get my own shot. On my first day, I took a 10-minute flight of stairs to the beach and then walked around the town. I just couldn’t figure out where it was. Then the second day, I randomly decided to walk up a hilly street and, voila, I found it! You have no idea how overjoyed I was to find that elusive view!

Related Post: How I Dealt with a Stalker on a Solo Trip To Dubrovnik, Croatia 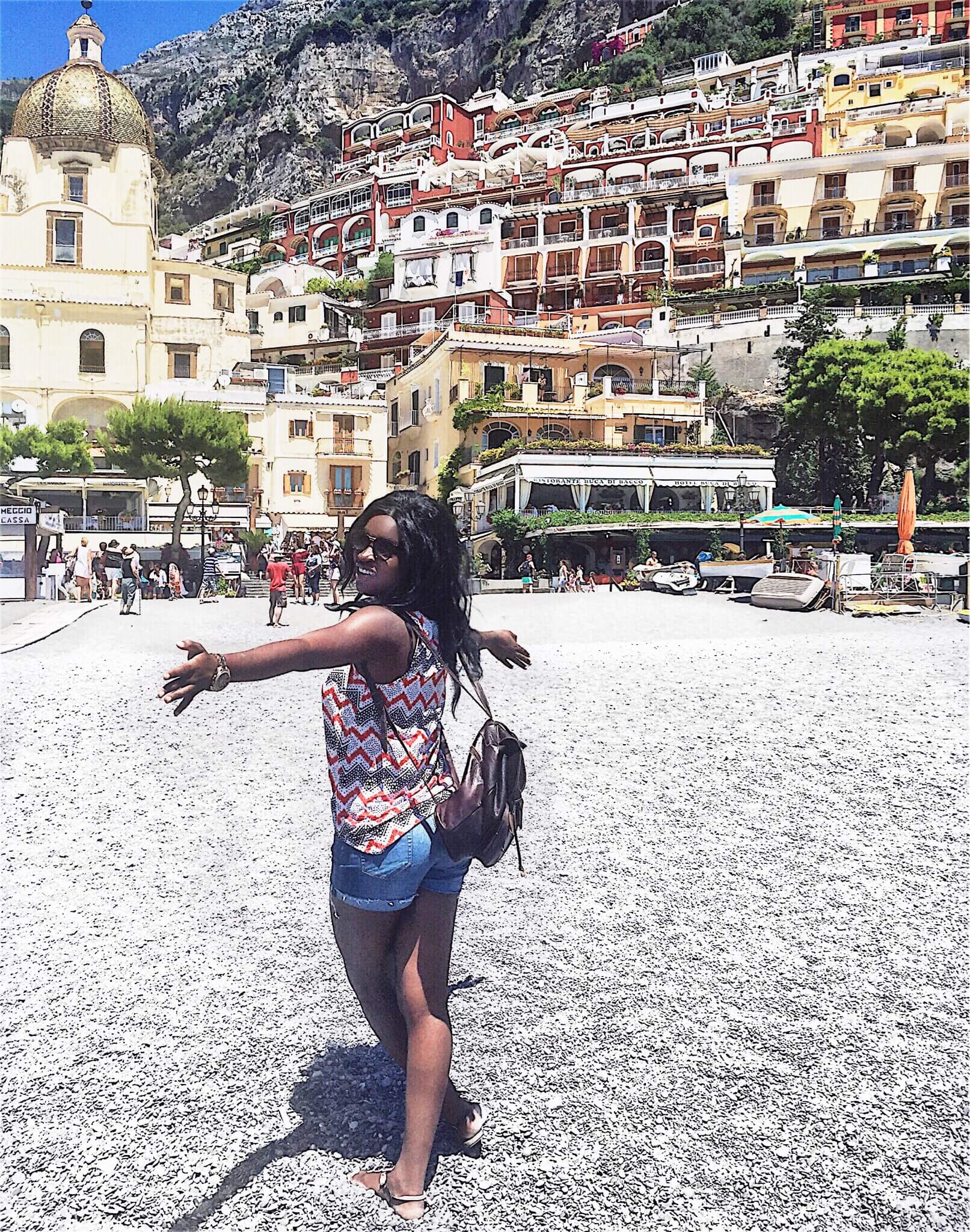 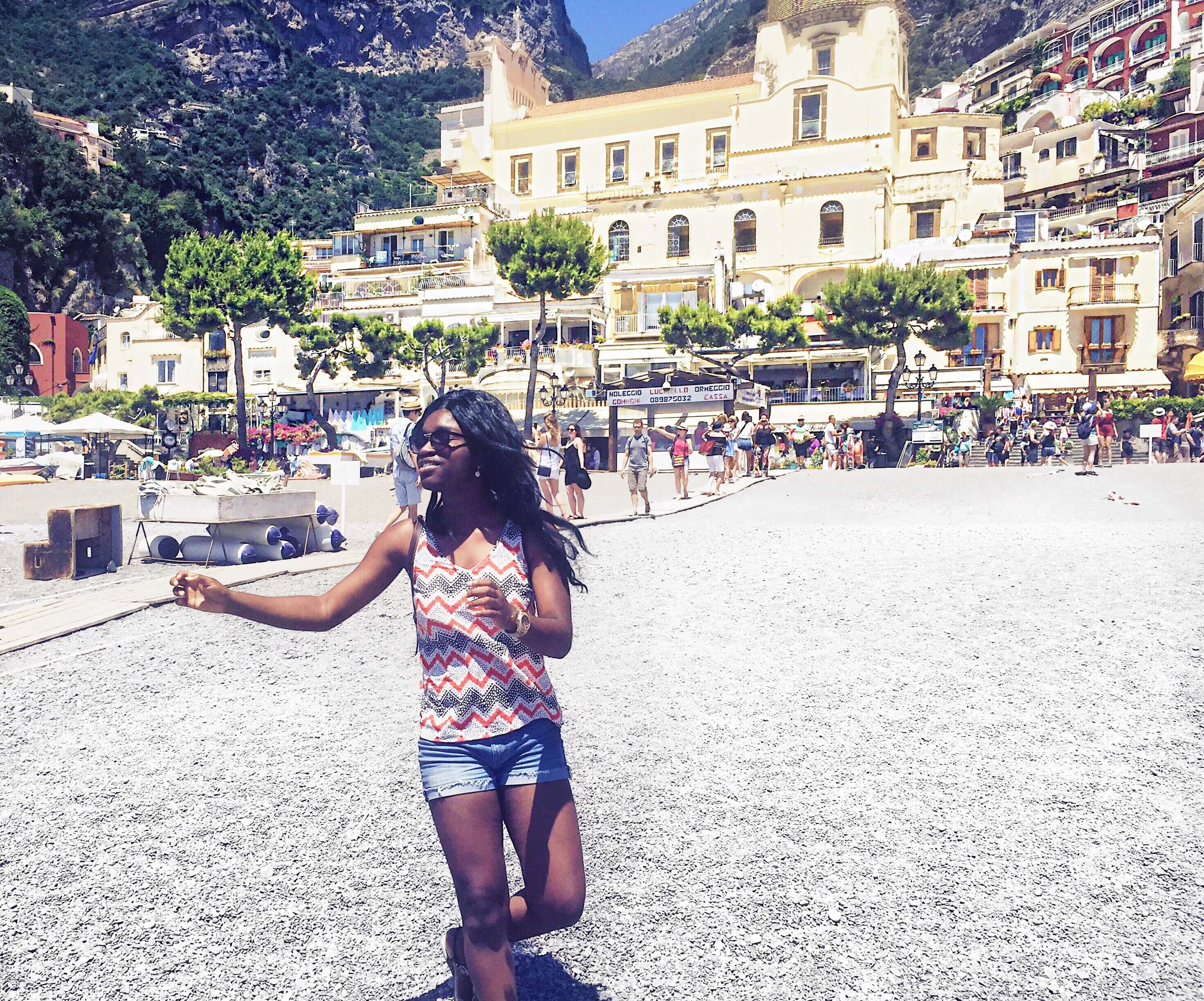 Although its expensive and hard to get to, Positano is my favorite place in Italy (well so far after two trips.) My escape to Positano was the ultimate dream getaway. Very few places have my breath away as much as it did. Positano and the Amalfi Coast should absolutely be on your bucket list!

YOU MAY ALSO LIKE  Spain Bucket List: The 10 Best Beaches in Spain You Should Visit Before You Die

If you have any questions about planning a solo trip to Positano, ask away in the comment section. 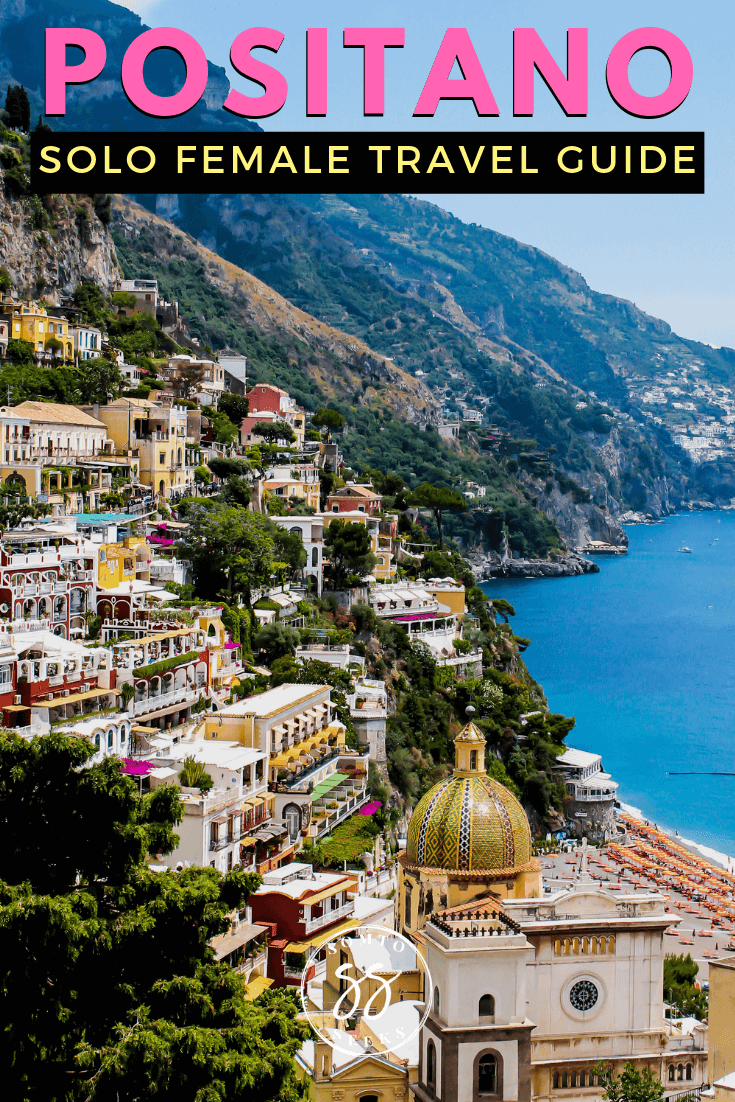 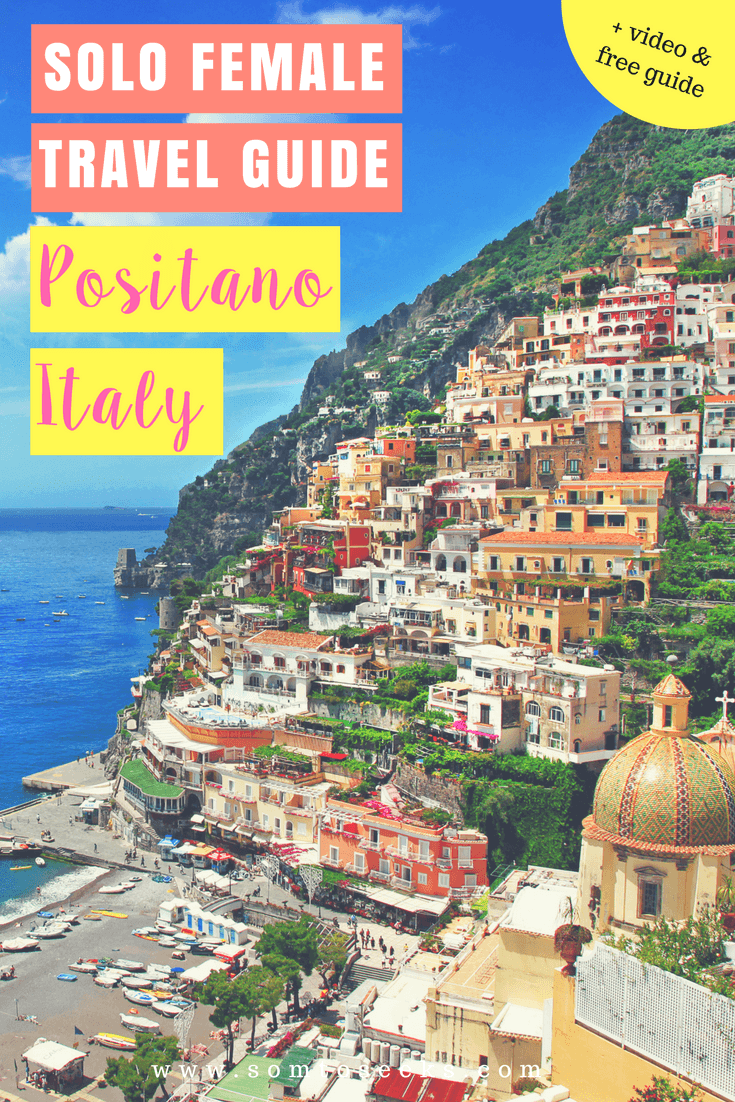 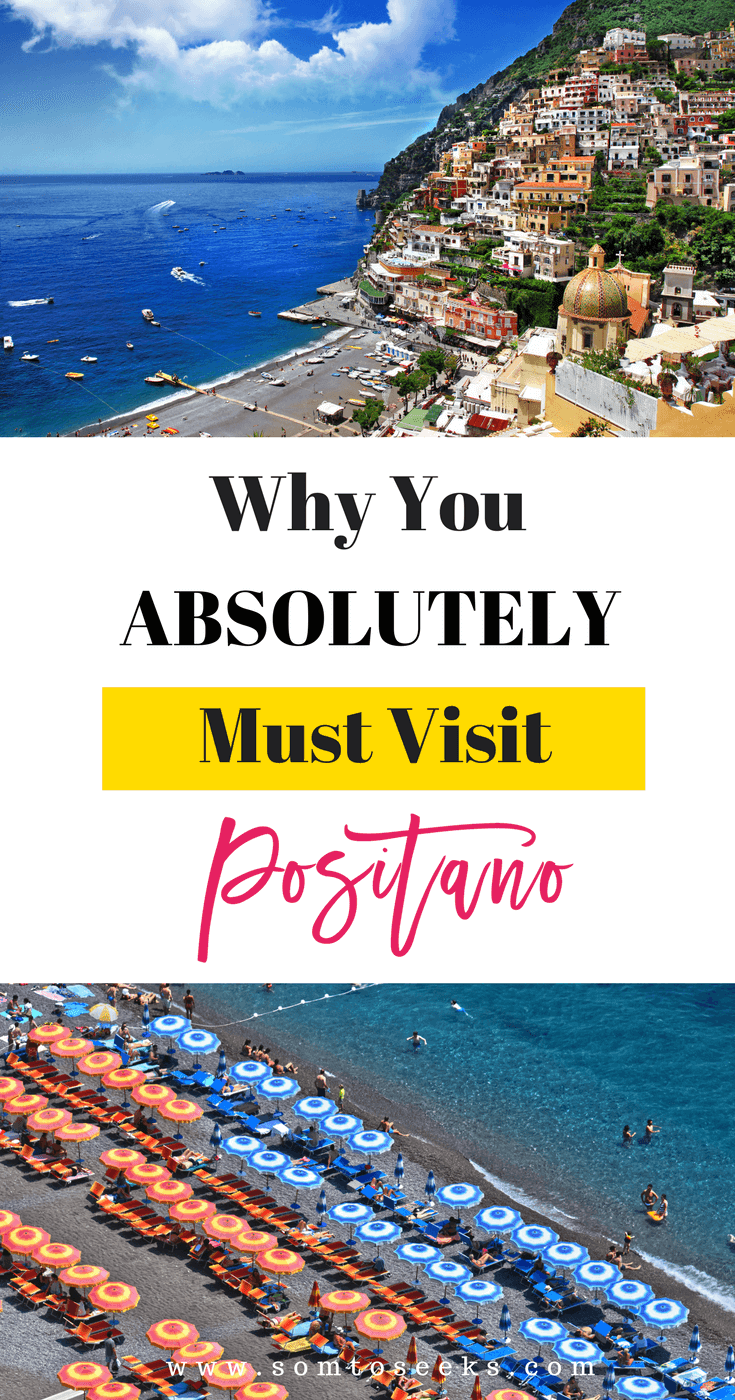