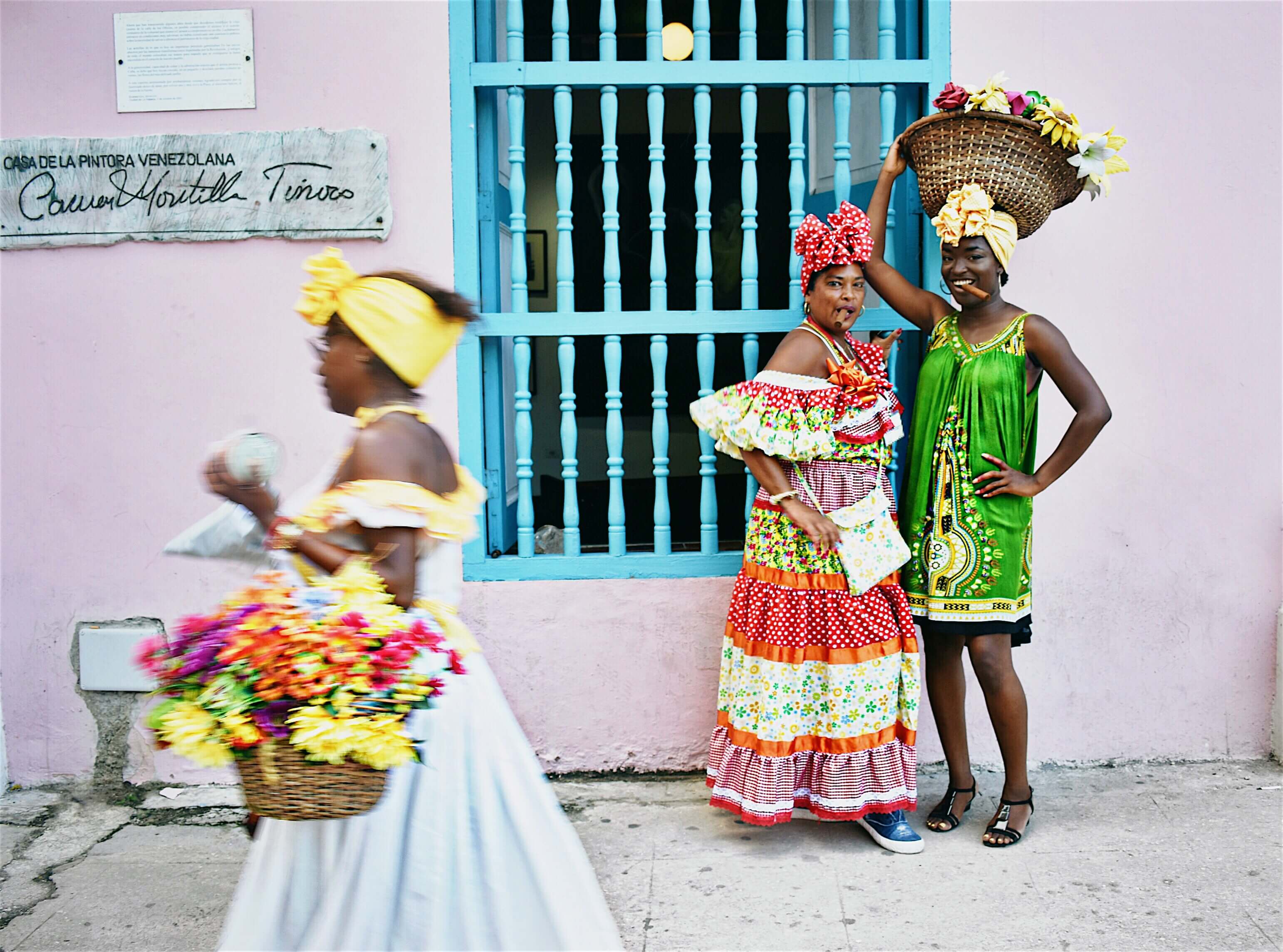 With Hurricane Irma brewing in the southern Caribbean, I had an important decision to make: continue with my trip to Cuba or cancel it, my family’s recommendation.

Havana had been calling my name for years! Fascinated by Celia Cruz and Afro-Cuban culture, I dreamed of strolling through the streets of Old Havana and listening to the African-infused rhythms of salsa. I wanted to sit in an open terrace restaurant, devouring some ropa vieja and yucca frita. Basically, I had been having a love affair with this island for a while.

So the decision wasn’t actually too hard: let’s go! When it comes to travel, I can be impulsive, throwing reason out the window in favor of instant gratification. It was Tuesday morning, and Irma was projected to hit Cuba on Saturday. Eager to justify my decision, I reasoned that I had enough of a time window to evade the hurricane. In the worst-case scenario, I would move up my departure flight.

I realize I was downplaying the seriousness of a 400 mile-wide, Category 5 hurricane. But, with Trump’s travel restrictions on Cuba looming, I felt that I needed to take this dream trip before it was too late. Going against stern warnings from my family, I went ahead with my plans.

My travel buddies, Lizeth and Jessica, arrived at my house at 5 am in the morning. We then caught our 8:50 am Alaska Airlines flight from LAX to Havana’s Jose Marti Airport, arriving 5 hours later.

Upon arrival, I felt like I was in familiar territory. Jose Marti Airport, complete with old, abandoned airplanes and surrounded by lush greenery, reminded me of the Abuja Airport in Nigeria. The setup of the airport’s interior and customs area was almost identical to Abuja’s.

Exiting the airport, my travel buddies and I ran into a little dilemma: our pre-booked taxi failed to start. The driver told us to hop out and lend him a hand. I speak Spanish fluently, but had a difficult time understanding his dialect. Even Lizeth, a native speaker, struggled a little. As he started the engine, we pushed the taxi from behind while he pushed it from the side. Soon enough, the taxi roared to life and we were good to go. We hopped back in and drove to our accommodation in the city. What a way to begin the trip!

Frank, the owner of our casa particular (the Cuban equivalent of an Airbnb), met us in front of his apartment in Havana’s Vedado neighborhood. He was a soft-spoken, composed man in his late 20s with a great command of English. Frank showed us around the two-bedroom apartment, which was spacious and homely. Later in the evening, he gave us a quick tour of Vedado and the surrounding area, including the scenic drive by Havana’s famous El Malecon strip. Frank then dropped us off at Hotel Nacional, an exclusive hotel frequented by wealthy foreigners, so we could access Wi-Fi.

YOU MAY ALSO LIKE  10 Things NOT To Do in Barcelona: Tourist Mistakes To Avoid

You see, Wi-Fi is a commodity in Cuba. Because Cuba is a police state, residents are denied basic freedoms, including access to the Internet. We had to purchase one-hour Wi-Fi cards from the Hotel Nacional’s Business Center for 5 CUC each (about 7 dollars. Cuba has a dual currency system – one for tourists (CUC) and one for citizens (CUP). 1 CUC equals about 25 CUP.) There are also Wi-Fi parks across Havana, but Internet access is strictly limited to those locations.

The first night in Cuba gave us a brief introduction to the country’s culture and politics. The second day, however, was like drinking from a fire hose. This was all thanks to Alejandro, a handsome and masculine taxi driver whom found on Calle Almendrales, the main taxi street in Vedado. Lizeth, Jessica, and I were planning to go explore Havana Vieja, but upon entering Alejandro’s green and white classic car, our plans changed completely. Alejandro negotiated a deal with us: for a flat fee, he would be our guide for the whole day and show us all the most important attractions. The fee? Twenty dollars each. Deal!

We started our tour in Havana Nueva, making stops at the famous Plaza de La Revolución and El Bosque de Havana. While having some piña coladas under a tree at the Bosque (forest), Alejandro told us the unfiltered truth about life in Cuba.

“Cubano es una mala raza (Cuban is a bad race),”he said, referring to the decades of deprivation Cubans have experienced at the hands of the country’s authoritarian government. Alejandro wasn’t saying that Cubans are bad people – far from that. He was saying that desperation combined with the inability to leave the country is almost like a curse for the Cuban people.

Although he was just 28, Alejandro was wise for his age and had a stoic temperament you would expect from an elderly person. He at times seemed resigned, like when he talked about how impossible it is for Cubans to get a visa to visit other countries. Yet he was ambitious and clearly making the best of his situation.

The average Cuban, Alejandro said, makes 20 CUC per month. That’s how much I paid for my two piña coladas. Alejandro, on the other hand, makes five times that amount due to his profession. Surprisingly enough, being a taxi driver in Cuba is more lucrative than being a doctor. Why? As a doctor, the Cuban government pays you a fixed salary along with monthly rations of food. As a taxi driver, you can charge tourists top-dollar for tours and also get tips. But you have to be business savvy and attentive to woo the tourists. You also have to scrape together around $23,000 to purchase the fancy classic cars that tourists like. That’s why the taxi driving profession is out of reach for most Cubans.

The last leg of the tour was Havana Vieja (Old Havana), where Alejandro dropped us off. First stop: La Feria. This bustling in-door market was the perfect place for souvenir shopping. We haggled our way through the complex, purchasing some drums, maracas, and fridge magnets to thank our families for allowing us to go on this wild adventure. Then we were off to explore the lively streets at the heart of Havana Vieja.

It was everything I had imagined: Spanish-style architecture and people dancing salsa in the streets. The energy of the people was infectious! Take Laza, a vivacious Habanera whose colorful clothes match her personality. She called us over, put polka dot scarfs on our heads, and did a photo shoot with us. All for just 3 CUC each! Then there was Tomasa, an elderly woman sitting by the side of the street, puffing away on her cigar. She also called us over and agreed to take pictures for just 1 CUC! I later learned that she is somewhat famous in Havana Vieja after finding photos of her with lots of other tourists online.

Alejandro picked us up after a couple of hours of traversing Havana Vieja. We were famished! Alejandro took us to El Clasico, a treehouse restaurant by El Morro Castle. Then he dropped us off at home. After resting, we took a ‘taxi’ to Hotel Nacional Nacional. It wasn’t actually a taxi. It was a 20-something year old man, his mom, and his sister driving around. They offered to take us to the hotel for 8 CUC, which was a steal given that the regular yellow taxis cost 15-20 euros.

We arrived at Hotel Nacional once again and connected to the Wi-Fi. That’s when panic set in. Hurricane Irma was now classified as the strongest storm ever recorded in the Atlantic. It would hit the northern coast of Cuba on Friday morning, earlier than expected. Our departure flight was scheduled for Friday evening. I had seriously underestimated the severity of this storm!

I had 15 missed calls from my mom so I got in touch with her right away. With a tremble in her voice, she asked, or demanded I should say, that we come home right away. I couldn’t argue with this one. Irma was no joke.

YOU MAY ALSO LIKE  How To Spend 48 Hours in Havana: Cuba Travel Guide

‘Is this the dumbest decision I had ever made?’ I thought to myself. Not quite, but it was definitely impulsive and risky. After a tense two hours of discussing how to proceed with Lizeth, Jessica, and our parents, we arrived at a solution. We would leave Cuba the next evening. My mom graciously arranged new flights for us to depart at 6 pm on Thursday. With the situation cleared up, I slept easily that night.

Thursday rolled around, and we had a couple of hours to kill before our flight. We packed up our belongings and headed out with Alejandro to Playa del Este, a 45-minute drive from Vedado. We originally thought about going to Varadero, but it was a whopping two hours away. There just wasn’t enough time to go there and still make our flight. Playa del Este was a good alternative.

The first thing I thought once Alejandro dropped us off at the beach, was ‘Wow!’

With white sand and turquoise water, it reminded me of the beaches of Cancun. But it was more secluded and less touristy. There was a really lovely green path leading to the beach. Then once you got to the other side, it was like discovering a hidden paradise. Now it was time to actually relax! The previous day, the girls and I had been running around Havana, trying to see everything. At Playa del Este, Lizeth went for a swim while Jessica and I lounged on the beach chairs.

A few coconuts later, we headed over to the beachfront marisquería (seafood restaurant) for our last meal in Cuba. It was a feast: garlic lobster, grilled cod, and sweet potato chips coupled with a fresh salad and Cuban staples: rice and black beans.

Over lunch, we talked about the craziness of this whirlwind trip and all came to an agreement: it was definitely worth it! We only saw a glimpse of Cuba, but it left a strong impression on us. Visiting Cuba was almost like entering another dimension. This small island nation was just so different. Yet it was also familiar in some ways, with the blend of Spanish and African influences.

After reflecting and chatting for a while, we saw Alejandro pull up in his car. It was time to say goodbye to Cuba. Alejandro gave us each his contact information so we could get in touch on our next visit. I will most definitely reach out!